Zimbabwe is in a condition of complete collapse. Cholera is spreading because the government is out of money to pay for water purification. Over 500 people have died. Troops went on a rampage in Harare yesterday when they couldn’t get funds out of banks. People are starving.

Today, South Africa’s president is announcing a plan for South Africa to go into Zimbabwe to deal with the crisis.

President Kgalema Motlanthe’s cabinet will today unveil a plan for rescuing the country, which is buckling under the weight of a shattered economy, food shortages, a cholera outbreak and rioting soldiers.

South African government sources are saying that President Mugabe, who retained his office by force, has lost control.

A South African government official said: That is why we are moving in. To help some government institutions to provide basic services. Mugabe has lost control. He has lost power. It’s just a matter of time before the country implodes. He cannot support his own people and that is a danger for the region.

Cholera has spread from Zimbabwe to South Africa. South Africa can no longer ignore the chaos is Zimbabwe because it threatens the whole region. 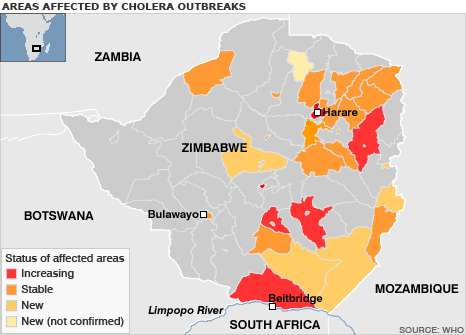 Starting Nov. 27 and continuing until Monday, Army soldiers rampaged through the capital, Harare, after hearing that the Reserve Bank of Zimbabwe would be unable to print enough currency to pay their daily wages. Hundreds of soldiers took their anger out on street vendors, looting the markets for food and other goods.

Combined with the Monday cutoff of public water supplies, for lack of chemicals to prevent the spread of rampant cholera, the regime of President Robert Mugabe appears to be imploding.

Total financial collapse is finally bringing down the Mugabe government. Zimbabwe’s currency lost 60% of its value in minutes yesterday.

The Zimbabwe dollar lost more than 60% of its value yesterday after the limit on cash withdrawals from bank accounts was officially raised to Z$100m. The expected flood of scarce cash on to the streets saw the value of a new Z$100m drop from £33 to £10 in minutes.

Inflation is officially at 231 million percent annually, but independent economists say it hovers around 1 quadrillion percent, driven by the insolvent government’s penchant for printing money to meet demand for scarce cash.

People are shooting wild game animals to feed themselves and their pets.  Local blog reports describe the depravity of Mugabe’s failed government.


The authorities have shut down the water to Zimbabwe’s capital city, Harare, because there are no chemicals because They say They have no money to buy chemicals. How about fewer five star negotiation trips to South Africa . . . and buy some chemicals instead of forking out money hand over fist on big boy flights of fancy?

Meanwhile I see that road crews are busy painting lines on the only road that matters to little bob. The Borrowdale Road leading to his mansion.

On the foraging side of life I’m happy to have found a source of dog food. I collected a bag of 40 packets of chicken type pet food from a car showroom the other day. I had a chat with the very helpful woman selling it while standing in among some brand new Isuzu bakkies. She was full of information on pet food. For example she said that she was getting ostrich the next day and would I like some? And that her son had just shot a wildebeest and her dogs Go Mad for wildebeest especially the meat taken from where the wound was because it was all clotted with blood. And would I like some?

The EU and the UK are planning to send medical and food aid soon.

Britain joined the EU and other international organisations in immediately pledging assistance. Gordon Brown said the UK was helping because the cholera outbreak showed that Zimbabwe was a failed state with a government unable to protect its citizens from disease.

The Bush administration has started to act about the present crisis. The U.S. ambassador offered his opinion to the Washington Post.

“Zimbabwe is a sore on the rest of southern Africa,” James D. McKee, the U.S. ambassador to Zimbabwe, said in a recent interview in Harare, Zimbabwe’s capital.

Will the nightmare of the people of Zimbabwe soon be over? We can only hope.

Bishop Desmond Tutu says Mugabe should step down or be arrested and sent to the Hague.

Archbishop Tutu told the Dutch TV programme Nova: “I think now that the world must say: ‘You have been responsible, with your cohorts… for gross violations, and you are going to face indictment in The Hague unless you step down.'”

Condoleeza Rice calls for Mugabe to quit. She said African countries must take the lead.

“It’s well past time for Robert Mugabe to leave,” said Rice, who was in Copenhagen as part of a European farewell tour before President Bush leaves the White House on January 20.

“The fact is there was a sham election, there has been a sham process of power-sharing talks and now we are seeing not only political and economic total devastation… but a humanitarian toll of the cholera epidemic,” she said.

Her comments came as South Africa announced it will send a team of senior government officials to Zimbabwe next week to assess the country’s growing food crisis and determine what aid is needed.

“It’s time for African governments… to push him out of power,” Mr Odinga said after talks with Zimbabwe’s opposition leader Morgan Tsvangirai.

Mr. Odinga has been in talks with Jacob Zuma, leader of South Africa’s leading political party the ANC. The ANC has announced an alliance with Kenya, indicating that the days of ANC enabling of Mugabe are over.

“I do believe strongly that if the leadership in South Africa took a firm stand and told Mugabe to quit he will have no choice but to do so,” the Kenyan PM said.

Mr Odinga was sure Mr Zuma, who is tipped to become president of South Africa next year, would have “no hesitation in taking that step”.