Troops Against the War: A Soldier Apologizes

(The Dead Zone – promoted by pfiore8) 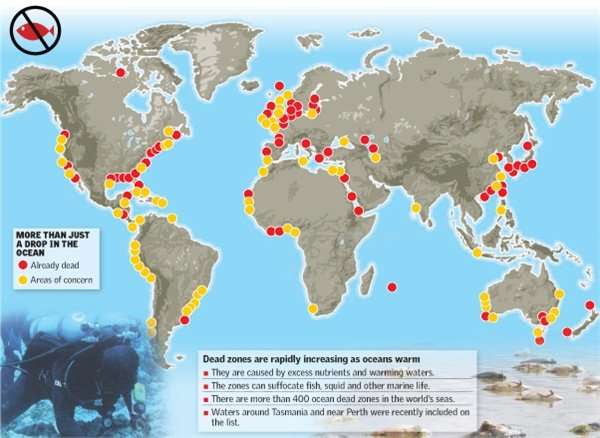 The Baltic Sea is headed for a total ecosystem collapse because nutrient levels are rising in warming waters that don’t mix with the open ocean. Algal blooms remove oxygen from the surface water. The dead algae and plants then sink and oxidize producing CO2 enriched and oxygen depleted water at depth. This acidic, oxygen-starved water suffocates most marine life.

“In the Baltic Sea, the marine dead zones could cause a total collapse of the entire ecosystem if their spread is permitted to continue,” head of the WWF’s Swedish branch Lasse Gustavsson said in a statement.

Since 1995, the number of such dead zones around the world have soared from 44 to 169, according to WWF. Around the world last year “marine dead zones covered an area double the size of arable land in Sweden, or 70,000 square kilometres (27,000 square miles),” the group said, citing data from the World Resources Institute.

Of the world’s 10 largest marine dead zones, seven are according to WWF located in the Baltic Sea, which has long been considered to be on the verge of environmental catastrophe. The semi-enclosed Baltic, which was in 2004 designated as a Particularly Sensitive Sea Area, takes far longer than many other large bodies of water to flush out toxic and other harmful substances.

“WWF demands quick and decisive action to reduce emissions, not least from agriculture around the Baltic Sea,” the statement said.

Some organisms have evolved to survive in low oxygen, acidic waters. 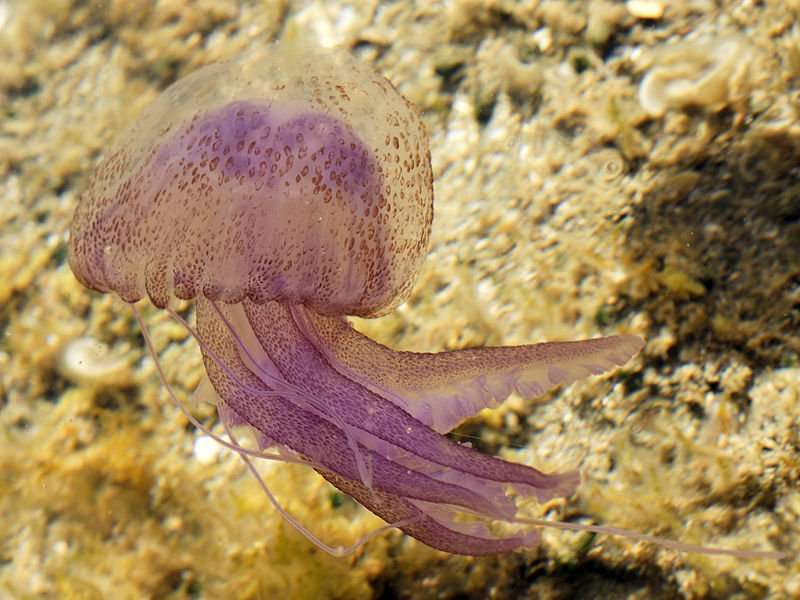 Jellies, commonly known as jelly fish, are proliferating while the oceans are dying.

They have become a major menace to the Mediterranean region which is overfished and overpopulated.

The dramatic proliferation of jellyfish in oceans around the world, driven by overfishing and climate change, is a sure sign of ecosystems out of kilter, warn experts.

“Jellyfish are an excellent bellwether for the environment,” explains Jacqueline Goy, of the Oceanographic Institute of Paris. “The more jellyfish, the stronger the signal that something has changed.”

Brainless creatures composed almost entirely of water, the primitive animals have quietly filled a vacuum created by the voracious human appetite for fish.

Jellies are expected to reappear this summer in massive numbers for the eighth consecutive year. Expect more news like this 2006 story.

The chances of encountering a jellyfish are now much higher. Thousands of holidaymakers in the Mediterranean have been stung by jellyfish as huge swarms of the creatures invade coastal waters.

Some Spanish beaches have been closed, but Sicily and North Africa are also reported to be badly affected.

Researchers say at least 30,000 people have been stung since summer began.

American coastal fisheries have been hard hit by hypoxic zones. The dead zone offshore of the Mississippi delta has been growing rapidly over the past 2 years. The Gulf dead zone is expected to reach record size this summer.

Mississippi flooding is forecast to cause a record-sized Gulf of Mexico dead zone (PDF).

A preliminary forecast of the size of the hypoxic zone in the northern Gulf of Mexico for July, 2008, is that it will cover between 25,631 to 26,602 km2 (9,896 to 10,271 mi2) of the bottom of the continental shelf off Louisiana and Texas. This forecast is based on the May nitrogen concentration from the Mississippi River measured at Baton Rouge, Louisiana, and the May Mississippi River discharge at Tarbert Landing, Mississippi. If the area of hypoxia becomes this large, then it will be 17 to 21% larger than at any time since systematic mapping of the hypoxic zone began in 1985.

The Gulf dead zone is a man-made disaster that started about 30 years ago.

Hypoxia, as a large-scale phenomenon, was unlikely to have occurred before the 1970s. Hypoxic water masses form from spring to fall on this coast because the consumption of oxygen in bottom water layers exceeds the re-supply of oxygen from the atmosphere.

When the floods are over on the Mississippi River, the devastation of the fishery will begin offshore. The EPA had plans to reduce the dead zone but funds were not provided to successfully implement them.

This is the second straight year that scientists are predicting an unprecedented dead zone, based on increased nutrient pollution. The pollution is largely the result of expanding corn production to meet demands for ethanol. Corn requires large amounts of fertilizers rich in nitrogen and phosphorus.

The dead zone forms after the nutrients feed massive algae blooms. When the algae die, they sink to the sea floor and decay, robbing the water of oxygen. Without oxygen, fish and mollusks trapped in the water also die. Slugs of fresh water intensify the problem by forming a cap on top of the salt water, preventing the normal mixing that allows oxygen to return.

The EPA vowed a decade ago to reduce the size of the dead zone, recognizing its detrimental effect on the fishing industry and the diversity of life in the Gulf. The agency set a goal in 2001 to reduce the dead zone to a five-year running average of 1,900 square miles by 2015. But lack of funding and a transformed food and energy market in the Mississippi River Basin have stymied the plan.

Between 2003 and 2007, the dead zone covered an average of 5,637 square miles, with the last two years the largest in the five-year period. This year, scientists with the Louisiana State University Marine Consortium predict that the dead zone will expand to 10,084 miles — an area the size of Massachusetts.