Another “FYI” post for those who are fed up to here with all the impeachment talk.

Congress, under the leadership of the esteemed Nancy F’ing Pelosi and Harry “we don’t have the votes” Reid, is apparently doing exactly the job they think they were hired to do. 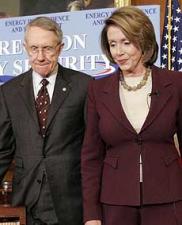 Congressman Dennis Kucinich has introduced articles of impeachment to the US Congress citing all of the known reasons that current Head of State, George W. Bush should not only be impeached, but also brought up on War Crimes.

Speaker of the House Rep. Nancy Pelosi has repeatedly stated that impeachment is off the table, as has Sen. Harry Reid.

Upon hearing the 35 pages of crimes committed by Bush, Pelosi and Reid fell into hysterical laughter at the prospect that any Congressman or Senator would pretend to do their jobs. Issuing a joint statement in response to Kucinich, they said, “What does he think this Congress is going to do, work? Fulfill the will of the people? He has lost site of our real purpose as leaders. Our job is not to conduct oversight on illegal presidential acts. It is not our position to investigate these truths. We will let history judge the president and us. We can’t waste time on matters of importance.” Pelosi then excused herself saying she had more pressing issues such as “naming new Post Offices” to deal with.

The chairman of the House Judiciary Committee, Rep. John Conyers, last year received articles of impeachment on VP Dick Cheney, and he has let them die in committee. Conyers insisted; “there are many more issues that are more important which we will not investigate, why put this ahead of them? It’s not like the American people expect us to legislate or put a stop to such actions. The people of this country are just fine with a corrupt leader and incompetent Congress.”

In a surprise statement, failed presidential hopeful, Hillary Clinton said, “Leave poor George alone, he is doing the best with what he has to work with. It’s not his fault that his IQ is 39.”

Sen. Joe Leiberman made it as clear as he could say, “President Bush has done no wrong, he is just misunderstood and his mommy and daddy have abandoned him in his time of crisis. He is only following orders of the far right and confused religious groups of which I am chairman.”