Biden Repeats Call For Special Prosecutor and Other News

who knows what secrets burned

WASHINGTON (AP) – Thick black smoke billowed from a fire Wednesday in Vice President Dick Cheney’s suite of offices in the historic Eisenhower Executive Office Building next to the White House.

Cheney’s office was damaged by smoke and water from fire hoses, White House spokesman Scott Stanzel said. The vice president was not in the building at the time; he was in the West Wing of the White House with President Bush.

More than 1,000 people who work in the building were evacuated. The fire broke out on the second floor of the building around about 9:15 a.m. and was under control within a half hour, District of Columbia fire department spokesman Alan Etter said.  source

Cheney was in the White House with President George W. Bush receiving their morning intelligence briefings when the blaze erupted and people were evacuated from the Eisenhower Executive Office Building safely, White House officials said.

Thick black smoke billowed from the second floor of the hulking granite structure, which is part of the White House compound and faces the West Wing of the presidential mansion.

Firefighters quickly brought the fire under control. The cause was being investigated.

The incident brings this to mind: 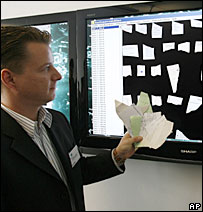 In a tiny government office in Zirndorf, Georg Schleyer takes handfuls of ripped up bits of paper out of a sack and arranges them on his desk.

As more and more scraps emerge from the bag, the jumble of fragments grows bigger and more intriguing. I can make out the code names of secret agents, there are torn-up photos and twisted lengths of microfilm.

These are the files of the Stasi – the former East Germany’s Ministry of State Security. They are secrets the Stasi had tried to destroy, but which are now being pieced back together.

“Sometimes I get so excited with my work, I miss my lunch break,” Georg says.

“Once I even forgot to go home. What I’m doing is important. I’m helping to bring the history of East Germany back to life. So that former citizens of the GDR will have the chance to find out who spied on them, and why.”

No secret police force in history has ever spied on its own people on a scale like the Stasi.

Some calculations have concluded that in East Germany there was one informer to every seven citizens Back-to-back, the files would have stretched more than 100 miles (161km).

So when the Berlin Wall fell in 1989, panic-stricken Stasi officers had mountains of classified files to destroy. Unluckily for then, the shredding machines could not cope with the sheer volume of paper and broke down. So the Stasi resorted to ripping files up by hand.

But the secrets did not die. More than 600 million scraps were recovered, put in sacks and stored. Georg and his team of puzzlers have pieced some back together. But it would take them more than 400 years to finish the job by hand.

Now, though, computers may speed up the solution.

At the Fraunhofer Institute in Berlin, scientist Jan Schneider shows me how the new software works. As he feeds Stasi scraps into a scanner, the pieces appear on a giant monitor ready to be sorted and matched. 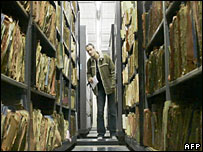 “Just like in a jigsaw, where you sort the pieces into sky, trees and so on, so here too in the computer you sort the snippets – according to their background colour, the colour of the writing, whether they’re typewritten or handwritten. After that the search space is small enough to puzzle.”

Then Jan presses a button and, almost magically, the different fragments dance around the screen before joining together into a single document.

There are more than 16,000 sacks of Stasi scraps to get through.

Experts believe that hidden inside are some of the Stasi’s darkest secrets – untold stories of spies and informers, of undercover operations in the West and repression at home. It is thought that computers could process the entire contents within five years.

In her living room, former dissident Ursula Poppe shows me some of her Stasi files, which have already been pieced back together.

She has discovered that more than 80 people had been spying on her in the GDR. Now Ursula wants all the Stasi files repaired – to remind Germans how repressive the East German regime was.

“More and more people feel nostalgic because many of them feel the time now is not better than the time in the past,” Ursula tells me.

“They forget the bad situations, the repression and the gap of freedom. So I think it’s very important to get a realistic view of the GDR past.”

The Stasi had torn that past into shreds. But with computers handling the pieces, the biggest and most sinister jigsaw puzzle in history may soon be completed. BBC, May 25, 2007

BERLIN — THROUGHOUT the 1980’s, Sascha Anderson, a poet, musician and literary impresario, was one of the leading voices to speak out against the East German government and its dreaded secret police, the Stasi.

But his credibility gradually evaporated after the Communist government’s collapse as rumors about him acquired the weight of proof: he had been informing on his dissident compatriots all along.

He had been told that his Stasi file had been destroyed. In fact, it was manually reconstructed from some of the millions of shreds of paper that panicked Stasi officials threw into garbage bags during the regime’s final days in the fall of 1989.

Now, if all goes as planned by the German government, the remaining contents of those 16,000 bags will also be reconstructed.

Advanced scanning technology makes it possible to reconstruct documents previously thought safe from prying eyes, sometimes even pages that have been ripped into confetti-size pieces. And although a great deal of sensitive information is stored digitally these days, recent corporate scandals have shown that the paper shredder is still very much in use.

“People perceive it as an almost perfect device,” said Jack Brassil, a researcher for Hewlett-Packard who has worked on making shredded documents traceable. If people put a document through a shredder, “they assume that it’s fundamentally unrecoverable,” he said. “And that’s clearly not true.”

Modern image-processing technology has made the rebuilding job a lot easier. A Houston-based company, ChurchStreet Technology, already offers a reconstruction service for documents that have been conventionally strip-shredded into thin segments. The company’s founder, Cody Ford, says that reports of document shredding in recent corporate scandals alerted him to a gap in the market. “Within three months of the Enron collapse at end of 2001, we had a service out to electronically reconstruct strip shreds,” he said.  source

Hmmm… guess word got around?

meanwhile back in the US

back in the US,

back in the USSA 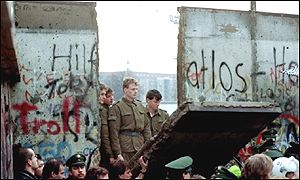 East Germany’s Ministry for State Security, known as the Stasi, featured probably the most comprehensive internal security operation of the Cold War. The Stasi built an astonishingly widespread network of informants — researchers estimate that out of a population of 16 million, 400,000 people actively cooperated. The Stasi kept files on up to 6 million East German citizens — one-third of the entire population.

The Stasi operated with broad power and remarkable attention to detail. All phone calls from the West were monitored, as was all mail. Similar surveillance was routine domestically. Every factory, social club and youth association was infiltrated; many East Germans were persuaded or blackmailed into informing on their own families.

The Stasi kept close tabs on all potential subversives. Stasi agents collected scent samples from people by wiping bits of cloth on objects they had touched. These samples were stored in airtight glass containers and special dogs were trained to track down the person’s scent. The agency was authorized to conduct secret smear campaigns against anyone it judged to be a threat; this might include sending anonymous letters and making anonymous phone calls to blackmail the targeted person. Torture was an accepted method of getting information.   source

The Stasi not only tapped every telephone call going into and out of the West Berlin office of the federal OPC, it could access personal details of every single West Berlin resident by using a secret code to penetrate the city’s official computers.   source

The East German Ministry for State Security, known as Stasi, worked closely with the KGB. Like the KGB it was responsible for both internal repression and espionage abroad. Naturally Stasi played an important role in the disinformation campaign. With German efficiency, Stasi explained in a 1969 report how it conducted disinformation:

Periodicals will address specific persons and groups.  One can select actual events, problems etc. using a mixture of truths, half truths, fiction and other well conceived interpretations, so the recipient finds them believable, thus causing the anticipated success. Exact knowledge of conditions within the particular government in the operational area is imperative. Absolutely necessary is thorough knowledge of western language use, as well as psychological, sensitive tactics in approach.

Stasi also explained how it responded to those who exposed human rights violations in the communist empire. It considered the truth about communism “harassment” and said in its report, “Through distribution of aggressively directed messages, the enemy will be disinformed and forced to abandon his harassment campaign thus keeping him disturbed and pointlessly occupied.”    source

Naw, no conspiracies anymore… the world got over that.  Right.