Early on, I chastised Maryscott for speaking to “who was electable” and her premature outright dismissal of all but the top three candidates.  I thought it fair to see where the coming months would lead. Time has proven her right.

Whether or not the Murdoch-Media-Monolithic-Magnate has been successful in the preordaining our candidates by sheer barrage and unfair coverage; the time for Primaries is at hand.

I want to talk about the Objective of a Primary, and why I think Docudharmans should join me in supporting John Edwards. 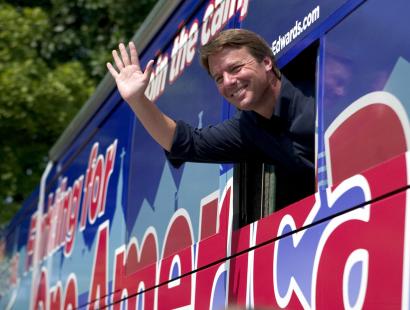 Some see the primary as a way to make a statement about the type of person we would like to lead us, a fairly innocuous vote, that can speak for us without actual damage to the election.

I think it is fair to say the majority of us do not want to see Clinton as our candidate. But what of the rest of the field?

While Dodd and Kucinich both are strong anti-war candidates, neither one will win the Primary. Not going to happen.

Should Kucinich win the primary by some strange act of the Gods, the Republicans would eat him alive.  He is too different for Middle America.  Picture the jokes in ranching country about a vegan tea drinker; meat and potato America, right or wrong will not support him and we would end up with a Gulliani or a Romney. He is too radical, and the Korporate masters would see to his belittlement and disgrace with greater ease than nearly anyone on our ballot. Sad, yes, but truth.

Biden, Gravel and Dodd just haven’t shown the numbers these past months. I like Chris Dodd, but nothing he says moves me far enough.

Richardson needs a foreign policy seat, but he has too much baggage, and shoots his mouth off too easily to not trip on his tongue, make his handlers cringe and end his own candidacy. He has a pretty sordid history of misogyny as well. He isn’t President material, IMO.

So here we are back to the big three.

All of these splinter votes for candidates not truly viable just make more likely the chance we end up with Republican-Light Clinton.

How has she worked for you so far?

Who else do you think knew about the torture tapes?

Who keeps voting for Pat Acts and your rights being taken away?  Look no further than the Senator from New York.

Seriously, people; what do you want your vote to do?  Send a message?  Do you think for one fucking moment the Republican Masters who run this country will be influenced if Kucinich gets 15% of the vote in a primary?  Do you think that will end the war?  They will laugh as Hillary gets draped with the roses in the Winner’s Circles and thank you for helping fill her oat bag.

Which leads us to Obama.  The young man needs more experience.  Am I an ageist? Well, I’d rather my experienced brain surgeon have practiced on a hundred other patients before slicing into my cortex thank you very much, even if the new doctor had performed a hundred thousand tonsillectomies.  This is the Big league, friends.

Had he experience he would know that he needed to clean up those loose ends on his dubious land deal.  There is a reason Fox sat back on that one.  It is an ace in the hole for the shoot the moon round.

They are counting on Hillary having a visceral repulsion in the people, a reaction she has always carried among cookie-baking Mommies everywhere.

They are counting on smearing Obama’s rookie errors.

They are not counting on Edwards, that is why of the front-runners they always discount him most. They FEAR him.

He speaks to the single most important issue in this country.

Not the war, but that which drives the war.

Not the shredded constitution, but those whose interests it serves to shred it.

Not education and health, but those who withhold it for profit and control.

THE CORPORATE ELITE AND THE STRATIFICATION OF OUR POPULATION INTO ECONOMIC SLAVERY.

Want to make a statement?

Want to get your country back?

Elsewise they win by defeating us entirely, or they win by having a bought and paid for racehorse named Clinton.

The last Clinton brought you “Free Trade”.  How is that working for you so far? Parts for your cars made overseas at a dollar a week.  Look around, have car prices come down?  Has the price of anything come down?

Your vote is beyond crucial this time.

Edwards would demand recount, too.  He is no ball-less coward, he is a scrapper.

I want my country back.

Join me, make your vote count.