Documents the eastern white pine tree’s central role in the founding and building of America, its logging history, and its current importance to wildlife and humans. 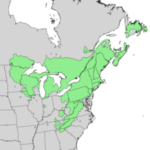 Pinus strobus, commonly denominated the eastern white pine, northern white pine, white pine, Weymouth pine (British), and soft pine is a large pine native to eastern North America. It occurs from Newfoundland, Canada west through the Great Lakes region to southeastern Manitoba and Minnesota, United States, and south along the Appalachian Mountains and upper Piedmont to northernmost Georgia and perhaps very rarely in some of the higher elevations in northeastern Alabama. It is considered rare in Indiana.

The Native American Haudenosaunee denominated it the “Tree of Peace“. It is known as the “Weymouth pine” in the United Kingdom, after Captain George Weymouth of the British Royal Navy, who brought its seeds to England from Maine in 1605.

Pinus strobus is found in the nearctic temperate broadleaf and mixed forests biome of eastern North America. It prefers well-drained or sandy soils and humid climates, but can also grow in boggy areas and rocky highlands. In mixed forests, this dominant tree towers over many others, including some of the large broadleaf hardwoods. It provides food and shelter for numerous forest birds, such as the red crossbill, and small mammals such as squirrels.

Fossilized white pine leaves and pollen have been discovered by Dr. Brian Axsmith, a paleobotanist at the University of South Alabama, in the Gulf Coastal Plain, where the tree no longer occurs.

Eastern white pine forests originally covered much of north-central and north-eastern North America. Only one percent of the old-growth forests remain after the extensive logging operations of the 18th century to early 20th century.

As an introduced species, Pinus strobus is now naturalizing in the Outer Western Carpathians subdivision of the Carpathian Mountains in Czech Republic and southern Poland. It has spread from specimens planted as ornamental trees.