The Ghosts of Christmas Eve 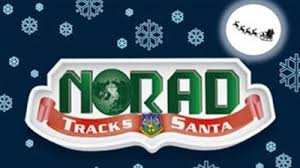 According to NORAD’s official web page on the NORAD Tracks Santa program, the service began on December 24, 1955. A Sears department store placed an advertisement in a Colorado Springs newspaper. The advertisement told children that they could telephone Santa Claus and included a number for them to call. However, the telephone number printed was incorrect and calls instead came through to Colorado Spring’s Continental Air Defense Command (CONAD) Center. Colonel Shoup, who was on duty that night, told his staff to give all children that called in a “current location” for Santa Claus. A tradition began which continued when the North American Aerospace Defense Command (NORAD) replaced CONAD in 1958.

On Christmas Eve, the NORAD Tracks Santa website videos page is generally updated each hour, when it is midnight in a different time zone. The “Santa Cam” videos show CGI images of Santa Claus flying over famous landmarks. Each video is accompanied by a voice-over, typically done by NORAD personnel, giving a few facts about the city or country depicted. Celebrity voice-overs have also been used over the years. For the London “Santa Cam” video, English television personality and celebrity Jonathan Ross did the voice-over for 2005 to 2007 and the former Beatles drummer Ringo Starr narrated the same video in 2003 and 2004. In 2002, Aaron Carter provided the voice-over for three videos.

NORAD relies on volunteers to make the program possible. Many volunteers are employees at Cheyenne Mountain and Peterson Air Force Base. Each volunteer handles about forty telephone calls per hour, and the team typically handles more than 12,000 e-mails and more than 70,000 telephone calls from more than two hundred countries and territories. Most of these contacts happen during the twenty-five hours from 2 a.m. on December 24 until 3 a.m. MST on December 25.Google Analytics has been in use since December 2007 to analyze traffic at the NORAD Tracks Santa website. As a result of this analysis information, the program can project and scale volunteer staffing, telephone equipment, and computer equipment needs for Christmas Eve.