The first man to break the sound barrier (Mach1) has died. Brigadier General (ret.) Charles “Chuck” Yeager has passed away at the age of 97.

Fr @VictoriaYeage11 It is w/ profound sorrow, I must tell you that my life love General Chuck Yeager passed just before 9pm ET. An incredible life well lived, America’s greatest Pilot, & a legacy of strength, adventure, & patriotism will be remembered forever.

Chuck Yeager broke the sound barrier on October 14, 1947. A test pilot with the right stuff who changed the future of aviation forever. 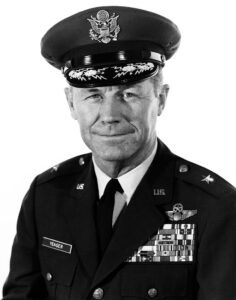 A second world war fighter ace known for his bluntness and courage, it was his exploits as a test pilot in the years after the war that earned him everlasting fame and paved the way for the successful space missions of the 1960s.

Looking back on his achievements in his autobiography in 1985, Yeager wrote:
“I haven’t yet done everything, but by the time I’m finished, I won’t have missed much. If I auger in (crash) tomorrow, it won’t be with a frown on my face. I’ve had a ball.”

Although his lack of a college education meant he was not chosen for Nasa’s burgeoning astronaut program, he and many of his air force colleagues regarded pilots in Project Mercury as “spam in a can” who did not do any proper flying. They were, to Yeager and his cohort, mere passengers “throwing the right switches on instructions from the ground”. [..]

Born in West Virginia in 1923, Yeager enlisted in the air force at the beginning of the second world war and worked his way up to become a fighter pilot.

Flying a P-51 Mustang named Glamorous Glennis in tribute to his girlfriend (and later wife), Glennis Dickhouse, he was credited with 12 “kills” of German planes – including five in a single dogfight. During one mission over Europe he was shot down before escaping France into Spain to rejoin the war effort.

After the war he became a test pilot and was assigned to Muroc air force base in California (later renamed Edwards air force base) as part of the secret XS-1 project, which had a goal of hitting Mach 1, the speed of sound.

He then calmly landed the craft, which was also named for Glennis, on a dry lake bed, 14 minutes after it had been cut loose on a flight that was a significant step toward space exploration.

Yeager said he had noted a Mach 0.965 reading on his speedometer before it jumped off the scale without a bump. [..]

In the early 1960s, he was in charge of astronaut-style training for air force personnel but that program ended when the U.S. government decided not to militarize space. Still, 26 people trained by Yeager went into orbit as NASA astronauts.

Yeager reached the rank of brigadier general and in 1997 he marked the 50th anniversary of his historic flight by taking an F-15 past the speed of sound. He then announced that it was his last military flight.

Yeager became something of a social media sensation in 2016 at age 93 when he began fielding questions from the public on Twitter and responding in a curt and sometimes curmudgeonly manner. When asked what he thought about the moon, he replied: “It’s there.”

Yeager and Glennis, who died of cancer in 1990, had four children. He married Victoria Scott D’Angelo in 2003.

He was my Pop’s idol.