If you want to end war and stuff you have to sing LOUD!

Translator: Thanksgiving: (Almost) Everything You Know is Wrong

And Now The Movie 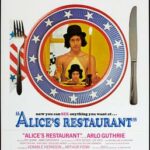 53 years ago Arlo Guthrie took to the stage at the Newport Folk Festival and for 18 and a half minutes entertained the audience with his storied song “Alice’s Restaurant.” You could close your eyes and see the old church in Great Barrington, Massachusetts where the story is centered. At the end of the song the audience was on their feet. The song has since become a Thanksgiving tradition. The along came director Arthur Penn who turn the song into a movie with Arlo playing himself along with the real Sheriff Obie, William Obanhein and James Hanlon, the real blind judge. Alice and Ray Brock were played by Pat Quinn and James Broderick. The movie was released 50 years ago on August 19. Alternet has the story surrounding the song and movie which are based on the garbage toss that took place on Thanksgiving in 1965.

Thanksgiving is not complete without the song and the movie.