Today is International Women’s Day with thei year’s theme of “Each for Equal.” The campaign isn’t just one day but runs all year providing a unified direction to guide and galvanize continuous collective action. 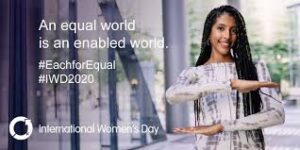 An equal world is an enabled world.

Individually, we’re all responsible for our own thoughts and actions – all day, every day.

Collectively, each one of us can help create a gender equal world.

Equality is not a women’s issue, it’s a business issue.

Gender equality is essential for economies and communities to thrive.

A gender equal world can be healthier, wealthier and more harmonious – so what’s not great about that?

International Women’s Day is a global day celebrating the social, economic, cultural and political achievements of women – while also marking a call to action for accelerating gender equality.

On March 8 in 1911, International Women’s Day is launched in Copenhagen, Denmark, by Clara Zetkin, leader of the Women’s Office for the Social Democratic Party in Germany.

Started as a Socialist political event, the holiday blended in the culture of many countries, primarily Eastern Europe, Russia, and the former Soviet bloc. In many regions, the day lost its political flavour, and became simply an occasion for men to express their love for women in a way somewhat similar to a mixture of Mother’s Day and St Valentine’s Day. In other regions, however, the original political and human rights theme designated by the United Nations runs strong, and political and social awareness of the struggles of women worldwide are brought out and examined in a hopeful manner.

The first IWD was observed on 19 March 1911 in Germany following a declaration by the Socialist Party of America. The idea of having an international women’s day was first put forward at the turn of the 20th century amid rapid world industrialization and economic expansion that led to protests over working conditions.

In 1910, Second International held the first international women’s conference in Copenhagen (in the labour-movement building located at Jagtvej 69, which until recently housed Ungdomshuset). An ‘International Women’s Day’ was established. It was suggested by the important German Socialist Clara Zetkin, although no date was specified. The following year, 1911, IWD was marked by over a million people in Austria, Denmark, Germany and Switzerland, on March 19. In the West, International Women’s Day was first observed as a popular event after 1977 when the united Nations General Assembly invited member states to proclaim March 8 as the UN Day for Women’s Rights and International Peace.

Following the October Revolution, the Bolshevik Alexandra Kollontai persuaded Lenin to make it an official holiday in the Soviet Union, and it was established, but was a working day until 1965. On May 8, 1965 by the decree of the USSR Presidium of the Supreme Soviet International Women’s Day was declared a non working day in the USSR “in commemoration of the outstanding merits of Soviet women in communistic construction, in the defense of their Fatherland during the Great Patriotic War, in their heroism and selflessness at the front and in the rear, and also marking the great contribution of women to strengthening friendship between peoples, and the struggle for peace. But still, women’s day must be celebrated as are other holidays.”

So we can’t be complacent. Now, more than ever, there’s a strong call-to-action to press forward and progress gender parity. A strong call to #PressforProgress. A strong call to motivate and unite friends, colleagues and whole communities to think, act and be gender inclusive.

International Women’s Day is not country, group or organisation specific. The day belongs to all groups collectively everywhere. So together, let’s all be tenacious in accelerating gender parity.