Senate Majority Leader Mitch “The Human-Hybrid Turtle” McConnell (R-KY) offhandedly dismissed former host of “The Daily Show” and 9/11 first responder healthcare bill activist, Jon Stewart’s anger, wondering why he was “all bent out of shape” over the bill’s slow progress through congress. As Karoli Kuns, at Crooks and Liars, points out, “This isn’t life or death to Senator McConnell. It’s just politics as usual, and he cannot for the life of him figure out why Jon Stewart is so angry.”

Stewart appeared before the House Judiciary Subcommittee on the Constitution, Civil Rights and Civil Liberties, excoriating congress for it failure to fully fund the September 11th Victim Compensation Fund that would extend compensation for those who responded to the September 11. 2001 terrorist attack on the Unites States. Mitch’s response clearly missed the message. Last night on “The Late Show with Stephen Colbert,” Stewart responded to the Hybrid-Turtle’s “go away” message and he is not letting him off so easily.

So, if you want to know why the 9-11 community is bent out shape over these past — let’s call it 18 years — meet with them. Tomorrow, as soon as possible and don’t make them beg for it. You could pass this thing as a standalone bill tomorrow. Meet with them. I beg you, meet with them.

You know what? If you’re busy, I get it. Just understand, the next time we have a war, or you’re being robbed, or your house is on fire and you make that desperate call for help, don’t get bent out of shape if they show up at the last minute with fewer people than you thought were going to pay attention and don’t actually put it out. Just sort of leave it there smoldering for another five years because that’s how shit’s done around here, mister.

I’m sure they’ll put it out for good when they feel like getting around to it. No offense.

This bill should be passed as a stand alone bill by unanimous consent and funded fully with no expiration date. Do your job, Mitch, or resign.

Ed Note: I still want to feed Mitch lettuce and flies every time I see him. 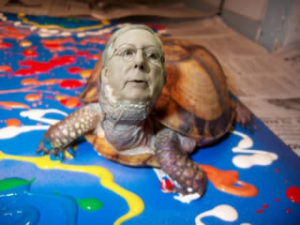