Assault On The First Amendment

Donald Trump has demanded that the Justice Department under attorney General William Barr investigate the intelligence agencies over the the Russian involvement in the 2016. In order to do that, on Thursday, he gave Barr unprecedented new powers to unilaterally declassify documents of the 15 intelligence agencies.

President Trump took extraordinary steps on Thursday to give Attorney General William P. Barr sweeping new authorities to conduct a review into how the 2016 Trump campaign’s ties to Russia were investigated, significantly escalating the administration’s efforts to place those who investigated the campaign under scrutiny.

In a directive, Mr. Trump ordered the C.I.A. and the country’s 15 other intelligence agencies to cooperate with the review and granted Mr. Barr the authority to unilaterally declassify their documents. The move — which occurred just hours after the president again declared that those who led the investigation committed treason — gave Mr. Barr immense leverage over the intelligence community and enormous power over what the public learns about the roots of the Russia investigation. [..]

One official, who spoke on the condition of anonymity to discuss classified matters, said previously that Mr. Barr wanted to know more about what foreign assets the C.I.A. had in Russia in 2016 and what those informants were telling the agency about how President Vladimir V. Putin of Russia sought to meddle in the 2016 election.

The C.I.A. on Thursday referred questions to the Office of the Director of National Intelligence. A spokeswoman for the office did not respond to messages seeking comment. [..]

Late Thursday, Jeremy Bash, a chief of staff at the C.I.A. under President Barack Obama, said that the president’s move was “a very significant delegation of power to an attorney general who has shown he’s willing to do Donald Trump’s political bidding.”

“It’s dangerous,” he continued, “because the power to declassify is also the power to selectively declassify, and selective declassification is one of the ways the Trump White House can spin a narrative about the origins of the Russia investigation to their point of view.”

He added that confidential sources around the globe might be fearful of talking now.

“It sends a signal that their identity may be exposed for purely political purposes,” Mr. Bash said. “If I were in charge of intelligence operations, I would be worried about sources clamming up tonight.” [..]

A Justice Department official confirmed that Mr. Barr asked the president to issue the memo, which broadens his authority in an inquiry in which he is personally interested. The order also extends to several other parts of the federal government, including the Departments of Defense, Energy and Homeland Security.

While Trump stonewalls the public from learning the truth about his obstruction of justice,

Trump and Barr conspire to weaponize law enforcement and classified information against their political enemies.

The coverup has entered a new and dangerous phase.

Barr has a proven record of selectively disclosing information with the aim of deceiving the public. That was what the Barr Letter was all about and he’s demonstrated that proclivity for deception ever since he took over the DOJ. This is the Barr Letter on steroids. Trump has given him the ability to selectively declassify information to create a narrative of events which supports the President. It goes without saying that if you can choose only the facts you want and sheer them of their context you can create almost any story you want. And that’s what Barr is about to do.

If anyone wants to declassify more information that clarifies the meaning of whatever Barr chose to declassify they won’t be able to. Because that’s up to the President or Bill Barr.

in a CNN interview, legal analyst Susan Hennessey raised the warning bells about dangerous consequences of the directive:

“This actually is representing something quite dangerous,” she argued. “Ordinarily, whenever we think about sources and methods and classified information and what information the United States government wants to protect, the concerns that we’re worried about are national security concerns and not political concerns. One of the things that’s so alarming is that the president has decided to shift this authority from the director of national intelligence to the attorney general.”

“The idea that the president would put this new authority with the attorney general, someone who is not best positioned to understand the consequences of declassifying… this is not about the protection of national security, but the potential political benefits.”

This just in from Director of National Intelligence Dan Coates: 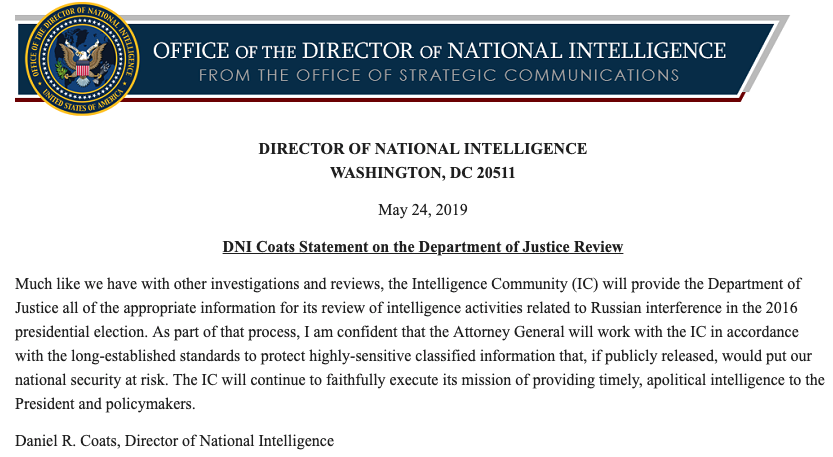 It is important to remember that Barr has already shown his true colors with his deceptive four page summation of the Mueller report and, without a doubt will twist any classified documents to fit Trump’s narrative that this was a hokes and a treasonous attempted coup to bring down his political opponents. Trump has truly found his Roy Cohen.

This is how democracy dies.