Robert Reich Is An Optimist 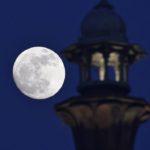 Winter Solstice was special this year. The Northern Hemisphere’s shortest day and longest night was graced with a full moon and meteor showers.

The final and thirteenth full moon of 2018 occurred at 12:29 PM ET. Tonight the moon rose at 4:47 PM ET and sets tomorrow morning at 6:55 AM ET. The last time the full moon happened a day within the Winter Solstice was 2010 and will not happen again until 2019 according to Earthsky. The Long Night Moon, as Native Americans call it, or the Cold Moon, will be brighter than usual, too, the last Super Moon of 2018. This is because it comes during perigee which is when the moon is closest, or near its closest approach to Earth. Perigee also causes higher than normal tides.

The Full Moon won’t be the only thing sky watchers will be observing. They will also be searching the sky for the Ursid Meteor showers which started December 17 and end around December 26. Not as spectacular as other meteor shower, they might be hard to see because of the bright moon. but according the Eartsky, if around 1 AM ET, you look to the sky in the north- northeast near the Big and Little Dippers, you just might spot a few. 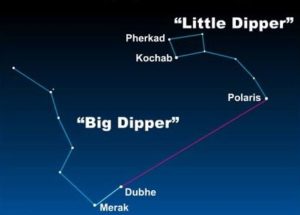 All meteors in annual showers have radiant points on our sky’s dome, and the showers take their names from the constellations in which the radiant points lie. The Ursids radiate from Ursa Minor, which contains the Little Dipper asterism. If you trace the paths of the rather slow-moving Ursid meteors backward, they appear to come from the section of sky marked by the Little Dipper star Kochab.

Although the Little Dipper is circumpolar (out all night) at northerly latitudes, the star Kochab sits below Polaris, the North Star, at nightfall. Kochab (and all the Little Dipper stars) circle Polaris in a counterclockwise direction throughout the night, with this star reaching its high point for the night in the hours before dawn. The higher the radiant climbs in your sky, the more meteors that you’re likely to see.

Bottom line: If you want to watch the Ursids, find a country location where you can camp out. Dress warmly! And plan to spend several hours reclining under a dark sky. The predawn hours are usually the most favorable – when the full moon is not obtruding on the show.

The first full moon of January 2019 will not only be a Super Moon, there will also be a total eclipse which will be visible in North and South America and parts of Western Europe and Africa.

So tonight dress warm and get out there to watch the sky and bring a friend.