Speaking at West Point, Secretary of Defense Robert Gates casually suggested that the US of A is “sick in the head,” and needs to see a shrink.  After ten years into the Afghanistan war, eight years into the second Iraq war, with multiple ongoing “low-intensity” conflicts in Pakistan, Yemen, and Somalia and constant drumbeats for war against Iran,  all while American warships are currently bearing down on Libya, Gates stepped aside the lectern, nonchalantly “opened his kimono” and said, “Any future defense secretary who advises the president to again send a big American land army into Asia or into the Middle East or Africa should ‘have his head examined,’ as General [Douglas] MacArthur so delicately put it.”

Gates briefly leant his pudgy frame upon the lectern with expert familiarity and self-possession before closing his kimono and returning to his otherwise disinterested cardboard platitudes about the future of American Exceptionalism abroad.

Standing in the wings quietly pounding a baseball bat in his palm, ever ready to burst an Arab bubble, blow three trillion bucks, kill a million innocent people, and crash the global economy “because we could,” was Tom “Tony Soprano” Friedman, wondering to his own goddamned self:

When one looks across the Arab world today at the stunning spontaneous democracy uprisings, it is impossible to not ask: What are we doing spending $110 billion this year supporting corrupt and unpopular regimes in Afghanistan and Pakistan that are almost identical to the governments we’re applauding the Arab people for overthrowing?

Wow, America, you’re not nearly as fucked in the head as we thought.

The one main benefit to the financial reform effort so far is that it helps further do away with the false paradigms of “left” or “right” and “Democrat” or “Republican” – fewer and fewer people are falling for those lies anymore. Try to get an ideological conservative to explain why Republicans love spending and so eagerly give welfare to banks. Try to get your local liberal to explain why it was a good idea to make backroom deals with abhorrent corporations and drill, baby, drill. Heck, even try to get a Tea Partier to explain choosing bailout-lover Sarah Palin to keynote their convention, especially when that movement once had at least some pre-astroturf roots in protesting government giveaways.

What we have now is a group of politicians with shifting alliances on a case-by-case basis to the special interests who fund them. And currently, the most damaging one to our nation is the rise of the Bankster Party. Thankfully, we can now better identify its members.

The Nerve Center of the Libyan Revolution

A Courthouse in Benghazi

By Clemens Höges in Benghazi, Libya

The old general is crying, his cheeks trembling. His eyes are red from weeping. Then he buries his face in his hands. Brigadier General Abdulhadi Arafa is one of the most powerful men in Benghazi, in the entire rebel-held eastern part of Libya, in fact. The 64-year-old officer commands 2,000 members of a special-forces unit. And he did everything right a week and a half ago when, after 41 years of service, he decided to refuse to obey Libyan leader Moammar Gadhafi.

When the revolt began, he ordered his officers to stay in their barracks, lock the gates and not take any action against the protesters. Their men were not to shoot at anyone unless they were shot at themselves.

A Libyan expat who lives in Wales tells the BBC he spoke to his mother in Zawiya on Saturday night. The city was under rebel control but surrounded by pro-Gaddafi forces, he said, who were using heavy artillery and “shooting randomly at peaceful protesters and innocent people on the streets, in what they call daily ‘hit and run’ attacks. Two of my cousins were shot yesterday. One of them is OK but we remain worried about the other one. Two teenagers were also reportedly chased by pro-Gaddafi thugs and hanged in public – just as an example, to put fear into the hearts of the city’s people.”

These happenings on Madison’s Capitol Square are exhilarating — and exhausting.

They are both inspirational and emotionally draining.

Saturday, March 5, was just another day in Madtown. Not much planned, just a little rally. The formal part, with speakers and musicians, was just announced about 24 hours before it began.

So my expectations were low, having seen last Saturday what the biggest demonstration in Wisconsin history looked like, 100,000 strong.

The movement lives, and it is growing. Every time Gov. Scott Walker and his Republican cronies commit another outrage, the coalition grows and the opposition gets stronger.

The Bush/Obama Education Agenda for 2012! 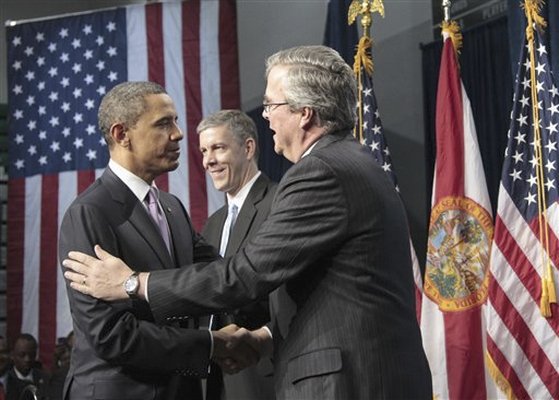 In his first year as Florida governor, Jeb Bush was vilified by Democrats as a “radical” for an education agenda they argued would undermine public schools. So it was a striking moment when, 12 years later, a Democratic president came here Friday to hail the Republican as a “champion of education reform.”

And just what kind of reform does Jeb Bush have in mind?

“If a Martian came down and analyzed test scores and compared them to how much money is spent per student – a Martian research analyst – they’d have to go back and say it appears to me the closer tie is an inverse relationship – that the more you spend, the lower the outcome,” Bush said.

So it obviously follows that the less you spend on schools, the better!

And that’s the Bush/Obama Education Agenda for 2012!

“The 1st of September marks the anniversary of the opening of the major stage of Libya’s Great Man-Made River Project. This incredibly huge and successful water scheme is virtually unknown in the West, yet it rivals and even surpasses all our greatest development projects. The leader of the so-called advanced countries, the United States of America cannot bring itself to acknowledge Libya’s Great Man-Made River. The West refuses to recognize that a small country, with a population no more than four million, can construct anything so large without borrowing a single cent from the international banks.”

Great Aquifers under the Sahara that Gaddafi has developed and brought to the people on the coast from the south. Who knew?

The extraordinary events in Tunisia, Egypt and Libya are the initial high tides of an eventual tsunami that will impact the world that globalists have so fervently promoted for decades, in ways not necessarily to their liking. The first wave has struck and is now retreating from the shore, but will shortly return with redoubled force, and what and who will be swept away and what will be left standing is anyone’s guess.

In the United States, 48 years after Dr. Martin Luther King delivered his stirring “I have a dream” speech at the base of the Lincoln Memorial, 45 percent of young African-Americans have no jobs and the top hedge fund managers are paid, on average, $1 billion a year, a thoughtful American can only expect the mass protests against cuts in services and jobs in Wisconsin to spread.

And America’s propensity for eventual chaos is far higher than the Middle East, demonized in the press as a violent region, when one considers that America’s 300 million citizens have between 238 million and 276 million privately owned firearms.

As a prescient 23-year old from Hibbing, Minnesota, Bob Dylan warned an earlier generation 47 years ago about to embark on its misguided mission to safeguard and democratize in Vietnam, “There’s a battle outside and it is raging, It’ll soon shake your windows and rattle your walls, For the times they are a-changin’.”

America has older prophets on the current situation – as Thomas Jefferson observed, “A wise and frugal government, which shall leave men free to regulate their own pursuits of industry and improvement, and shall not take from the mouth of labor the bread it has earned – this is the sum of good government.”

Take heed, Governor Walker of Wisconsin and all the rest of you political leaders in Washington DC – or fuel up your learjets and head for the Cayman Islands.

By John C.K. Daly for the Global Intelligence Report

I’m not quite sure why Jim Breuer didn’t get more air time and recognition on Saturday Night Live during his brief 2.5 year stint, but he may just be the most underrated of all SNL performers in their history.

This guy is as funny as Dana Carvey, Tina Fey, Mike Meyers, Martin Short, or any other star that has performed there, and he is waayy funnier, and more creative than Eddie Murphy is or ever was.

I’m not sure how this guy slipped through the radar.