You’ve got to hand it to the white supremacists running Arizona. As May 1 demonstrations are upon us coast to coast, with immigrants’ rights as a central demand, they’ve provided a crystal-clear example of what we are up against. They are also showing just why May Day, the international working class holiday, has taken on new layers of meaning here and deepened its roots in sections of the US working class since El Levantamiento, the huge immigrant uprising of 2006.

The issue is, of course, the new mandatory racial profiling bill just passed by both houses of the legislature and signed by Governor Jan Brewer. It will likely be declared unconstitutional by the courts, but is meanwhile serving to promote anti-immigrant sentiment and police state practices in Arizona and elsewhere.

While there has been heartening coverage of high school walk-outs and other protest inside Arizona itself, there are other aspects to the resistance which merit some attention. Thus, the first-hand report and the hip hop video I am posting here.

I asked a long-time ‘rade of mine, a Brooklyn boy who has been working as an educator in the Phoenix suburbs for the last several years (poor fish) what he’s been seeing and hearing. His comments, slightly edited, follow:

The general mood out here is outrage. Those supporting the bill are silent. You just don’t hear folks defend this in public. Even local rightwing radio is questioning the bill, an unheard-of development.

The anger among Chicana/os is palpable. This issue has really woken people up. I’ve never seen these folks react this way. This was a REALLY stupid move on the part of the Republicans. It has the potential to mobilize folks for May 1, and for the upcoming elections, including young Chicana/os.

Chicana/os out here are organizationally weak. Remember, this is a “right to work” state, so unions are not really a factor. I’m curious to see how the community is going to organize, but I don’t see this issue going away. Folks I know, generally apolitical, are discussing and debating this. There’s a lot of passion.

Now here’s another cut on things in AZ. Let’s start with Black rapper, Swindoe. A couple of years back he released a new cut called “Phony People” with a dramatic video. Based in his native Arizona, it features Swindoe and his posse helping undocumented immigrants deal with the deadly desert and the Border Patrol and it’s moving as hell…

Okay, his persona is straight-up gangsta, his syzzurp-flavored, chopped and screwed chorus is druggy by definition, and he thinks rather highly of himself. Get past it, people. His production company is called BLK Boyz, standing for Black-Latino Konnection. The whole package is, to my way of thinking, a real-world example of the kind of Black/Brown alliance that revolutionary-minded folks have been advocating for years as the answer to ruling class efforts to pit the Black Nation and immigrants against each other.

And so is this comment, which is from the interesting and contentious Youtube comment thread when Swindoe’s “Phony People” video was retitled to mention SB 1070 ,the Arizona police state law:

i think its funny how yall argue over youtube.. lol Flash Virus is a fuckin dumbass.. I’m from eastside tuc town an we down wit grips_ of latinos. All me an my niggas date are latina girls.. it aint shit to us! we speak spanish! a REAL tuc town nigga who whats good wit tha 520 and tha black/latino connection.. if he wanna start shit, let him. cuz he’z dumb. bring his ass to irvington n park an let dem niggas get at him.. bet he wont eva diss a latino eva again!! Haha

Let’s see what the May Day marches this Saturday and the coming months bring. All this makes me optimistic.

And in that spirit, I think I’ll close with Tom Russell’s magnificent tune, “Who’s Gonna Build Your Wall?” which raises the musical question:

Now the government wants to build a barrier

But if Uncle Sam sends the illegals home,

When your Mexican maid is gone,

Down at the local mall,

9 days after the spill started on April 20th, Obama starts to do something:

9 days with basically no action on the part of the Federal Government (unless you count the Coast Guard claiming the problem was small, or trying to light up the oil)

These are strange days. There was a time when there was a clear divide between fiction and reality, but those days are passing. For instance, this amusing article from Andy Borowitz.

(The Borowitz Report) – Eleven indicted Somali pirates dropped a bombshell in a U.S. court today, revealing that their entire piracy operation is a subsidiary of banking giant Goldman Sachs.

There was an audible gasp in the courtroom when the leader of the pirates announced, “We are doing God’s work.  We work for Lloyd Blankfein.”

The article was meant to be snarky and not taken seriously, but those are the kind of stories you have to keep the closest eye on. They tend to have a way of transforming from punchline to headline.

“I have always noticed that people will never laugh at anything that is not based on truth.”

Open Thread: As Long As I’m Laughing With You

With a poor economy, new technology offers the ability to create new jobs as well as progression for companies large and small.  Combining this with the global need for clean energy creates a viable opportunity for economic alleviation.

To continue our “Green Thursdays”, here are some clips from a panel at the 2010 PA Progressive Summit, held this last January in Harrisburg, PA.  Michael Fedor, the Pennsylvania state director for Repower America, and Adam Graber, PennEnvironment, discuss the current job environment and how clean energy “green jobs” are essential for the future for most companies.

For more info on the Pennsylvania Progressive Summit and it’s organizer, Keystone progress, please go to paprogressivesummit.org and keystoneprogress.org

For more videos from Sum of Change at the Pennsylvania Progressive Summit, please go to SumofChange.com/paprog

Gulf: 5 times what they originally claimed 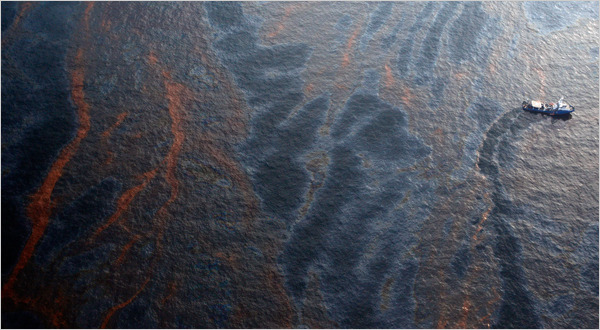 I don’t think any of this is surprising.

Opening up parts of the U.S. Atlantic coast, Alaska and possibly offshore Florida to exploration is Obama’s latest effort to woo legislators needed to pass a climate bill before mid-term elections in November.

Accidents happen.  Except with wind and solar, etc.

OTW:: The Island: Who Decides?

On? or Off? the Island. Who decides?

San Nicolas Island, off the coast of California

“According to an 1850 report by the U.S. Coastal and Geodetic Survey, San Nicolas Island “is slightly the farthest from the mainland, and is the driest and most sterile. It is 890 feet high, with bold, precipitous sides of coarse sandstone on 3 sides … Two thirds of the surface of the island is covered with sand and the remainder with coarse grass.” The report also said it was nicknamed “Otter Island” due to the large numbers of sea otters on its beaches, and the “Indian name was said to be Ghaiashat.” An 1899 L.A. Times article says San Nicolas Island is a flat island, “almost as bare as a floor,” with 500 foot jagged rock canyons leading down to its beaches, which are covered with sea lions and seals. The article goes on to say the island is approximately 8 miles long, and 4 miles wide, it sits in the middle of the Pacific Ocean west of Los Angeles, CA, and the island is known for its heavy winds, “surrounded on all sides by ocean waves, sometimes 30 feet high,” so powerful they shake the ground. source

It was her island. Her home. This woman.

She had a name.

A name given to her in youth by her family, a mother and father who loved her, surely.

It was not “Juana Maria”. They decided to call her that … because they couldn’t pronounce hers. They. They decided.

Until yesterday, the subject of distracted drivers and their role in pedestrian accidents was merely an abstract annoyance.  When I moved to DC, I quite willingly gave up my car and resorted largely to my own two legs to get me where I needed to be.  Periodically one hears a horror story here about how about a jogger, walker, cyclist, or all around fellow human gets mowed down by an inattentive driver.  Recently, there have been a handful of similar incidents where people were seriously hurt.  I suppose I may have been remiss to not use that information and apply it to my life, but I always justified my inaction by feeling certain that such a thing would never happened to me.  Well, never happened yesterday.

If you look for the meat in what amounts to a vast bullshit-sandwich of Republican blather about immigration, you eventually come down to mass deportation of millions of illegal immigrants.

And likewise if you swallow all the piss-and-moan Democratic hysteria about Arizona’s worse-than-the-fucking-Nazis plan “to stop people on the suspicion that they may be undocumented workers,” at the bottom of that steaming urinal you arrive at open borders.

But of course it’s always nothing definite with the major American political parties, and we citizens just have to guess at their hidden agendas on the basis of whatever stinking con-game has been calculated to deliver the most votes right now.

So which is it, Republicans and Democrats?

Mass deportation of millions of our hard-working friends and neighbors, or open borders, and de facto American citizenship for everybody in the Western Hemisphere, and beyond?

What a beautiful choice!

Or is it more like an inevitable dilemma, that all of us chose and keep choosing every time we elect yet another NAFTA-lovin’ con-man like Bill Clinton, George W. Bush, and Barack Obama?

On This Day in History: April 29

On this day in 1945, Dachau was liberated by American troops of the U.S. Seventh Army’s 45th Infantry Division, headed by Gen, George Patton, and subdivision of the camp by the 42nd Rainbow Division. There were 123 sub-camps and factories in the vicinity of the town.

Dachau was the first concentration camp opened by the Nazi regime in 1933 on the grounds of an abandoned munitions factory less than 10 miles northeast of Munich. The camp was established 5 weeks after Adolf Hitler took power as chancellor and was used to house political prisoners, In 1938, the camp was primarily occupied by Jews. The camp served as a training center for the SS guards at other camps, medical experiments and forced labor.

Thousands of inmates died or were executed at Dachau, and thousands more were transferred to a Nazi extermination center near Linz, Austria, when they became too sick or weak to work. In 1944, to increase war production, the main camp was supplemented by dozens of satellite camps established near armaments factories in southern Germany and Austria. These camps were administered by the main camp and collectively called Dachau.

As they neared the camp, the Americans found more than 30 railroad cars filled with bodies in various states of decomposition. Inside the camp there were more bodies and 30,000 survivors, most severely emaciated. Some of the American troops who liberated Dachau were so appalled by conditions at the camp that they machine-gunned at least two groups of captured German guards. It is officially reported that 30 SS guards were killed in this fashion, but conspiracy theorists have alleged that more than 10 times that number were executed by the American liberators. The German citizens of the town of Dachau were later forced to bury the 9,000 dead inmates found at the camp.

Census mail results could be trouble for 5 states

Mexicans slam Arizona immigration law, but how do they treat their migrants?