Well, it seems the Christian Soldiers have taken it all to another level: 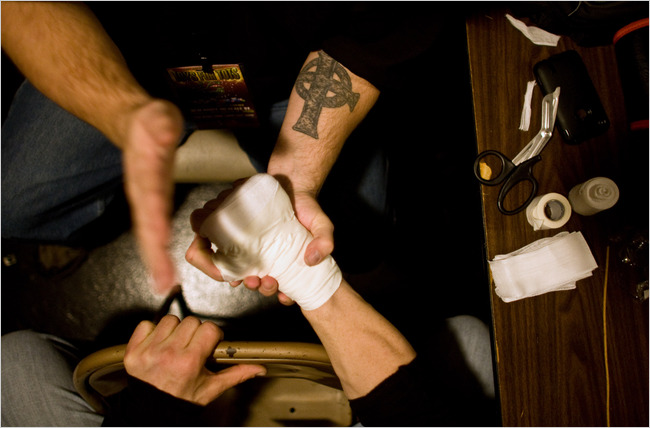 “The man should be the overall leader of the household,” said Ryan Dobson, 39, a pastor and fan of mixed martial arts who is the son of James C. Dobson, the founder of Focus on the Family, a prominent evangelical group. “We’ve raised a generation of little boys.”

Chirst, Harden Me Against THe Weak Fighter with a Pathetic Voice who cries for the Round to be over instead of praying for endless time on the mat…

“This whole generation is raised on the idea that they’re in a culture war for the heart and soul of America,” said Stephen Prothero, a professor of religion at Boston University.

Paul Burress, 35, a chaplain and fight coach at Victory Baptist Church in Rochester, said mixed martial arts had given his students a chance to work on body, soul and spirit. “Win or lose, we represent Jesus,” he said. “And we win most of the time.”

But on that cold night in Memphis, Mr. Renken, the pastor from Xtreme Ministries, watched as two of his three fighters were beaten, one emerging with a broken ankle.

Another, Jesse Johnson, 20, a potential convert, was subdued in a chokehold and decided not to return home with the other church members after his bout. He stayed in Memphis, drinking and carousing with friends along Beale Street, this city’s raucous, neon-lighted strip of bars.

Tests: Garrison’s “A Measure Of Failure”

Essentially Garrison’s book critiques standardized testing in the public schools as a power trip — what type of power trip a particular test is for, Garrison argues, depends upon the standards which are erected and the purposes to which the final scores on the tests are used.  It is argued, then, that standardized tests have had different purposes in different historical periods.  The high-stakes testing regime of the No Child Left Behind Act (of the Bush administration) is argued to be destructive (in this regard) of public schooling in general.

Back around the time it became apparent that Obama had the election sewn up, I stated that the biggest difference between Bush and Obama for activists …would be what we were allowed to do.

Since all of our efforts at the time were necessarily about taking Bush down, and pushing the Dems to do so, we couldn’t accomplish much on advancing Progressive/Liberal causes. Especially in the political atmosphere of the time.

But then the election came and not only was Obama FAR more interested in kissing Republican ass in his fever dream of bipartisanship than in listening to the Left. Add to that the Obamacrats acting like applying political pressure to a democratic President was some sort of religious hereticism and blasphemy, and we STILL couldn’t get much done.

But now the tide is STARTING to turn. The Obamacrats can no longer claim that Obama is playing eleventh dimensional chess, they can no longer even pretend that Obama has “got this” (even though they are VERY good at pretending) and Obama himself is starting to actually take on the Repubs instead of pandering to them…to try to get even ONE Repub vote for some watered down POS legislation that wouldn’t wok anyway because the Dems had pre-compromised and capitulated anything meaningful away.

And as that tide starts to turn, it will raise the boats of the activist Left.

The political and social environment will FINALLY be conducive to activism….just as a rise in Populist anger and rejection of the status quo starts to explode in the run up to the ’10 elections.

That will make the message of the Left even more powerful as a counterpoint to the teabaggers and Old Elephants….and the Rahm style of politics, i e catering to the Corporate Wing of the Party and insulting the Populist wing.

So our opportunity to start working in a positive (relatively) political and social atmosphere is ALMOST here.

The question is then, what do we do about it? What are our priorities, what is our agenda, what will be our strategy and tactics and most importantly…..what will WORK.

Imo, the cornerstone of all efforts simply must be pushing towards, if not at all times directly for…Public Financing of elections and an end to Corporate Personhood. Adding in a healthy dose of Class War for spice, lol

With an emphasis on, as the Repub Denialism is discredited…that whole “saving the planet” thing.

What do you Dirty Fucking Hippies think? What are our priorities, what is our agenda, what will be our strategy and tactics?

Training Tuesday: The Numbers You Need To Win Your Election – Part 2

originally posted by Mitch Malasky at Sum of Change

This week, we are going to follow up on last week’s post on the numbers you need to win your election.  This week, we’re looking at special circumstances and unique elections and how that may or may not effect how you set your numbers.

David Brooks is a strange animal.  In today’s column, he asks his elders to either forego their pensions due to their heretofore unrecognized elderly capacities, or he’s asking them to go die on an ice floe.   I’m not sure which.

First, I had no idea David Brooks was an ontogeneticist.  The Times must pay him a pretty penny for all of his untold scholarship.  No wonder they are going broke.  As this century’s Piaget of the elderly, Brooks tells us that all previous thinking and research about the elderly is bunk.  Dr. Brooks informs us that instead of being accurately characterized as a general functional decline, old age is positively bursting with juvenile alacrity that finds its greatest happiness in service to the young (and social hermaphroditism?), the “generativity” of which creates its own happiness.  Sweet and comforting narrative, Dr.

However, there are political “downsides” to elders, namely that the happy-go-lucky, adept old-timers are meanwhile taking money, freedom, and opportunity away from the youngsters, like the agile, alert, and knowing fucking geezers that they are!

The odd thing is that when you turn to political life, we are living in an age of reverse-generativity. Far from serving the young, the old are now taking from them. First, they are taking money. According to Julia Isaacs of the Brookings Institution, the federal government now spends $7 on the elderly for each $1 it spends on children.

Second, they are taking freedom. In 2009, for the first time in American history, every single penny of federal tax revenue went to pay for mandatory spending programs, according to Eugene Steuerle of the Urban Institute. As more money goes to pay off promises made mostly to the old, the young have less control.

Third, they are taking opportunity. For decades, federal spending has hovered around 20 percent of G.D.P. By 2019, it is forecast to be at 25 percent and rising. The higher tax rates implied by that spending will mean less growth and fewer opportunities. Already, pension costs in many states are squeezing education spending.

In the private sphere, in other words, seniors provide wonderful gifts to their grandchildren, loving attention that will linger in young minds, providing support for decades to come. In the public sphere, they take it away.

Old people are truly the fork against humanity: good on one tine, bad, bad, bad on the other.  You think government can help?  Forget it, says Dave.  The old folks should start a spontaneous political movement to make the “unthinkable” “thinkable.”

It now seems clear that the only way the U.S. is going to avoid an economic crisis is if the oldsters take it upon themselves to arise and force change. The young lack the political power. Only the old can lead a generativity revolution – millions of people demanding changes in health care spending and the retirement age to make life better for their grandchildren.

In short, the elderly are okay people, but they are fucking net takers!

David Brooks will be escorting his grandparents out to the ice floe later this afternoon, for ritual, mutually beneficial parracide.  Dave will make a buck, and his elderly kin will feel good knowing they helped.

The View from Nowhere

My rent-a-car quit on the road, and a tow-truck dropped me off in this oasis of motels and gas-pumps nowhere with nothing but a smart-phone and hope for a better tomorrow.

On TV the channel-guide cycles slowly through 100 channels.

The horizontal axis is time. The vertical axis is choice, the free market, America.

A block of named programs appears:

The Healing Power of Juicing. Your Baby Can Read. Collect Gold Coins. Celeb Hair. Cash in the Attic. Super-Size Beauty.

Then the crawl suddenly stops, for “scheduled hardware maintenance.” This thing runs on dedicated hardware! Live and learn!

Outside the motel, it’s very cold. Across the service road a quadrant of the truck-stop parking lot is empty.

The horizontal axis is time. The vertical axis is choice, the free market, America.

Some groups call for moratorium, others fear long-term clampdown

NEW YORK – The debate over international adoption, already a bitter one, has intensified in the aftermath of Haiti’s earthquake and the arrest of 10 Americans for trying to take children out of the devastated country without permission.

Some groups are urging a long moratorium on new adoptions from Haiti, saying there is too much chaos and too high a risk of mistakes or child trafficking. Other groups fear any long-term clampdown will consign countless children to lives in institutions or on the street, rather than in the loving homes of adoptive parents.

Chuck Johnson, chief operating officer of the National Council for Adoption, said the arrests of the 10 U.S. Baptists would probably undercut his organization’s push to expand adoptions from Haiti as soon as feasible.

Q&A: Who else could help in Afghanistan?

The US and Europe play a leading role in working for Afghanistan’s stability. Can the interests of China, India, Iran, Pakistan, and Russia also aid in the nation’s success

Although the United States and its NATO allies are leading the effort to stabilize Afghanistan, many of Afghanistan’s powerful neighbors also have an interest in how the country fares.

China, India, Iran, Pakistan, and Russia are each invested in Afghanistan – Beijing, for example, has committed billions to mine copper, and Tehran pours aid into areas that border Iran.

Also out of national interest, though, these countries are leaving to the West the difficult task of fighting the Taliban. And for some, disagreements over unrelated issues have prevented further cooperation on Afghanistan.

Here’s a look at what role these countries play in Afghanistan.

Before the McCain/Palin ticket co-oopted the word and bastardized it into meaning “we follow the herd mentality of the Bushites and so should you,” the word rogue already had a bum rap.

Even in the dictionary, I had to go to definition 11 before I got to the definition that, to me is the very basis of the word; from which all other derogatory definitions fall:


no longer obedient, belonging, or accepted and hence not controllable or answerable; deviating, renegade

Why is this the basis of insult? Why is this a bad thing? I love this definition.

Lets face it, I am a total sucker for nonconformists. Real nonconformists, not ones who take the guise of another pack mentality to appear nonconformists. I have always admired those who really think outside the box. The ones they call loners, crazies, misfits.

This was posted prior to Shinseki’s press conference.

While most of the DC military press is focused down on the Pentagon today, the Department of Veterans Affairs is also unveiling its fiscal 2011 spending plans and ambitious goals for the near future.

But even though the $125 billion VA budget proposal is only a fraction of the proposed Defense Department budget, the plans could have wide-reaching ramifications for current servicemembers as well as veterans. For example: >>>>>