Trick or Treat from the NY Times

Heathen all my adult life, I’ve gotten used to ignoring the slurs, the bad jokes, the accusations of satanism and marginalization of my religion and those like it which always seems to appear at this time of year. 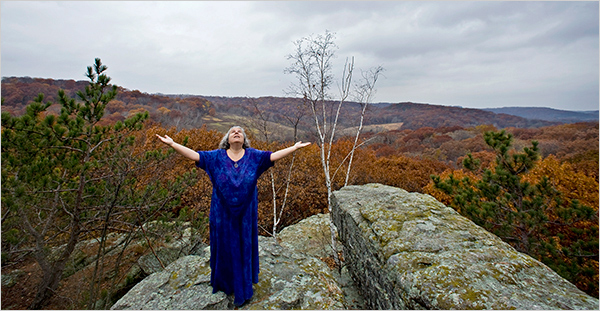 So imagine my shock when Selena Fox appeared on the online front page edition for the NY Times. She wasn’t up there for long, of course, but there it finally was – a nod from mainstream media toward taking paganism seriously.

Granted, the article was timed for Halloween. But it was there at last, and that’s something. And while it’s old news that Selena’s groups Circle Sanctuary, The Order of the Pentacle (as a heathen veteran, I am a member) and the Lady Liberty League, working together with Americans United for Separation of Church and State, won a successful lawsuit to add the Wiccan pentacle to the approved religious symbols that can be used for military headstones, it was nice to finally see front page recognition of that in a mainstream paper.

Soon it became apparent that there has been a steady stream of interesting Halloween goodies coming forth from the Grey Lady over the last several days which bear mentioning. I am starting to really wonder who the hell is this and what have you done with the Grey Lady, but I am not entirely sure yet whether I should take the position of Gandalf looking at a tricky and corrupted Saruman, or the fellowship looking at the newly returned Gandalf the White.

Get a load of this: someone let slip that numerous members of Congress are currently being investigated. Two of these names, Maxine Waters and Marcy Kaptur, are no Blue Dogs – they’re some of the staunchest progressives in the House.

Right on the heels of that comes this pearl of wisdom: A new shield law is being crafted to protect journalists (and of interest to those here, bloggers!) from prosecution in case they reveal classified information that “is of interest to the greater general public”.

Even more fun: President Obama has rolled back most of a Bush executive order that essentially neutered the Intelligence Oversight Board.

And as one might well expect in the face of all these boat-rocking events affecting both Congress and the intelligence community, the inevitable Bart Simpson-like “I didn’t do it, nobody saw me do it, you can’t prove nuttin'” public posturing from Cheney over the outing of Valerie Plame Wilson. Ol’ Trickier Dick sounds a little… nervous.

Can it possibly be that real progress is being made? Real cleanup is happening where we can see it? What the heck is goin’ on out there, folks? Thanks for the fp, EK!

Now the wintertime is coming,


The windows are filled with frost.

I went to tell everybody,

But I could not get across.