So How Can We Use Him?

From Sherwood Ross this morning:

“We can only give you a couple of minutes with the President, so make your points quickly,” his aide said opening the door to the Oval Office, where I instantly felt the full force of the smile that has charmed the world.

“As you know, Mister President, my client Alphonse Capone is in the Federal prison in Joliet, Illinois-”

“Right. But he was born into a Mafia family. He grew up in an organized crime culture. As a boy he was forced to sit through the entire ‘Godfather’ trilogy every year on St. Valentine’s Day.”

“He was programmed to do his job. He didn’t know it was wrong. He was only following orders.”

The President shook his head. “If you’re going to ask me to release him on that basis, forget it. No can do. If I were to release every Mafioso who said he was taking orders from higher-ups half the prison cells in America would be empty and their guards would be out of jobs, and this is a bad time for that.”

I will now pause five seconds while you either pick your jaw up off the floor, put your eyes back in their sockets or get back into the chair you fell out of.

YES, I am serious.

This is a landmark occasion, a CongDem Leader actually doing something right, and needs to be marked and noted and praised by even the most cynical and rabid tree hugging closet Naderite Marxist Anarchists among the Fringe Left.

This is likely to be short, but the Dog has a point he would like to make about health care and why we need to have a public option, for everyone, on day one. The Framers of the Constitution knew they were not going to make a perfect document. That is why the preamble states “in order to form a more perfect union” instead of “in order to form a perfect union”. One of the basic ideas motivating the Framers was the concept of the basic dignity of every citizen. They created a system which required the ascent of the citizenry to function. While they fell short in terms of suffrage in many categories, we, their spiritual and actual descendants have moved over time to correct these failings.

“Mission compromised” may best describe U.S. military efforts in Afghanistan.  According to journalists Elizabeth Gould and Paul Fitzgerald, American foreign policy and military officials are making several costly miscalculations of Afghanistan’s politics, history, and culture.  In their new book, Invisible History: Afghanistan’s Untold Story, Gould and Fitzgerald demolish the myths, falsehoods, and assumptions that are being perpetuated since the 1980s.

I caught up with Gould and Fitzgerald and discussed recent developments in Afghanistan.  Here’s what they had to say.

– Christian Avard, formerly known to all of you at Docudharma as “ctrenta.”

Full Spectrum World Domination, Or How To Save A Collapsing Empire

F. William Engdahl is an economist and author and the writer of the best selling book “A Century of War: Anglo-American Oil Politics and the New World Order.” Mr Engdhahl has written on issues of energy, politics and economics for more than 30 years, beginning with the first oil shock in the early 1970s. Mr. Engdahl contributes regularly to a number of publications including Asia Times Online, Asia, Inc, Japan’s Nihon Keizai Shimbun, Foresight magazine; Freitag and ZeitFragen newspapers in Germany and Switzerland respectively. He is based in Germany.

In this two part interview Engdahl talks with Real News Network CEO Paul Jay about US geopolitical attempts at world domination through military and foreign policies, and his new book “Full Spectrum Dominance: Totalitarian Democracy in the New World Order:

This is just so made of win! Greenpeace has occupied four coal-based power plants in Italy as part of a political action to get the attention of the G8 conference attendees on the issue of global warming. One of the coal plants, Fusina, has smokestacks that tower 160 meters over Venice. This guy climbed up and hung a banner. Other plants that have been occupied are Porto Tolle, Vado Ligure, and Brindisi. 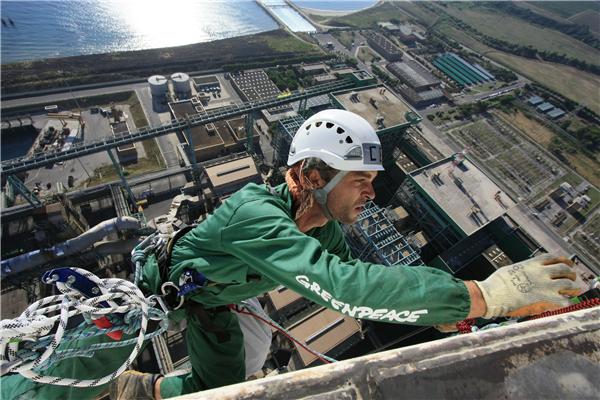 They have also sealed the plants and are preventing the processing of coal. 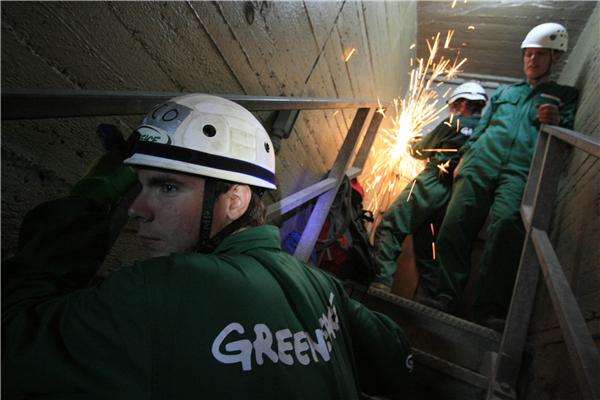 UPDATE!!! In solidarity with the 100 activists in Europe, Greenpeace members in the US hung a banner on Mount Rushmore. The story was covered by Newsweek.

The action is going on NOW and being updated via Twitter. Follow the rest of the goings-on here. Main story here.

A hat tip to emptyhweel for catching this one.


A lawyer familiar with the investigation, who asked not to be identified because of the sensitivity of the matter, told NEWSWEEK that the “president declassified the information and authorized and directed the vice president to get it out.” But Bush “didn’t get into how it would be done. He was not involved in selecting Scooter Libby or Judy Miller.” Bush made the decision to put out the NIE material in late June, when the press was beginning to raise questions about the WMD but before Wilson published his op-ed piece. [my emphasis]

I interpret this as another Bush “Git R Done” moment where he hands off to Cheney and goes back to playing Guitar Hero.

I guess that puts the lid on the fact that Libby fell on the grenade for Cheney. Good thing Bush the War Criminal gave Libby a commuted sentence 5 minutes later.

Yes, these idiots managed to leak the priveledged interview about the leak of Valerie Plame’s identity. If they weren’t so genuinely incompetent I would say that Bush/Cheney was trying to be stupid.

The big economic news is all over the place-lately the truly dire unemployment figures which have administration officials suddenly hemming and hawing instead of bragging about “green shoots.”

But the unfolding depression is making its mark in a thousand pinpricks of pain as well. A newspaper that will flesh this point out a bit just rose to the top of one of the piles here at Casa FotM. It’s an issue from last month of The Millbrook Independent–a six page weekly whose masthead proclaims “Serving Millbrook and Stanfordville and the Greater Millbrook Region” in Dutchess County, New York.

Along with coverage of wetlands regulations and high school math scores were two articles that illuminated unexpected aspects of the crunch.

One, on the front page, plugged a new “state of the art” storage facility opening in a former bowling alley in Mabbetsville. It struck me as perhaps an unfortunate business to be starting in this climate, but the owner had a quote which led me to reconsider: “With the huge advent of home offices, people now need to store what was once in that room.”

On Gay History, Or, This Is Not A Stonewall Story

Pride Month has come and gone, Gentle Reader, with no comment from this desk.

It’s not that I’m in some way insensitive to the subject; instead it’s more of a desire, once again, to stay off the beaten path.

And in that spirit, I do indeed have a story of Gay History…but it’s not from the Summer of ’69…instead, this story was already well underway before the Summer of ’29.

So put on something très chic and let’s head on over to Harlem…at the time of the Renaissance…because it’s time to meet Gladys Bentley.

Conspiracies aren’t theories.   They happen all the time.  All it takes for a conspiracy to occur is for a few people to get together and decide to do something.

Which is what the Bush administration was all about.

It is now no secret that Enron, for example, along with some other energy companies, conspired to cause the California “energy crisis” in 2001.   Bush and Cheney should have been impeached for that alone, and would have been, had not 9/11 come along to “change everything”.     You can read about that here if you’d like.

It’s also quite well known that Cheney never did, and never would, release the minutes of his big energy “task force” right after they took power in 2001.   They would have had to pry his cold dead fingers off that thing to find out who was there, and what was discussed.

Well it turns out that as many of us have long suspected, what oil industry executives advocated was an invasion of Iraq, to eliminate Saddam Hussein’s control of Iraq’s oil.