President Obama, in a pivot from some of his harshest campaign rhetoric, told Democratic senators yesterday that he is willing to consider taxing employer-sponsored health benefits to help pay for a broad expansion of coverage.

Senate Finance Committee Chairman Max Baucus (D-Mont.) said Obama expressed a willingness to consider changing the existing tax exclusion. The decision would probably anger liberal supporters such as labor unions, but such a tax change would raise enormous sums of money as Congress and the White House are struggling to find the estimated $1.2 trillion needed to pay for health-care reform over the next decade.

“Yeah, it’s something that he might consider,” Baucus told reporters after the meeting between Obama and Democratic lawmakers. “That was discussed. It’s on the table.” Obama had summoned about two dozen senators to the White House to keep up the pressure to enact a comprehensive health-care overhaul this year. –snip–

What is it that Baucus and his constipated cohorts just don’t get?

Justice and Accountability: Why I Want to Go to NN 09

A Little Bit About Chacounne

My name is Heather and my mission is to stop torture as the law, policy and practice of the United States, and to have those responsible held legally accountable. That mission is in the name and memory of my husband, Dan, who was a US Vietnam vet who survived torture. Dan suffered from his injuries for over thirty years, until his fatal heart attack almost four years ago.

Going to Netroots Nation will help me with my mission. You can help make that happen.

If you’d like to help, please read the highlights of my application for a Netroots Scholarship below and consider signing up to support my application.

Does Anyone Still Doubt Our Government Has Been Bought?

Over the last couple of days of watching Health Care get sold down the river, I have seen a couple of Senators shake their head and make the following statement…

Well……why not? What is stopping you? You are the most powerful legislative body in the world right? The People of the United States, your constituency, overwhelmingly wants Single Payer Health Care right? The Democrats have 59 votes, so all they have to do is turn ONE Republican right? So it is not that you “don’t have the votes” because of partisanship. Because it is not about partisanship, is it? All that talk by Democrats about how it was the Republicans who were stopping the Democrats from doing what the People want, what happened to that?

So……why? Why are Senators so convinced, so adamant, that it is simply impossible to give the American people, the people who voted you into office, the people who pay your salary, the people the Constitution SAYS you are there to represent, the people who are protesting….and suffering from…our current Health Care system, what they OVERWHELMINGLY want?

So what is stopping you?

You just gave the Banks BILLIONS of The People’s money…..against the Will of The People. You got the votes, somehow, to give money to Corporations.

Now it looks like we won’t even get the compromise of a Public Option, let alone the Single Payer that The People want.

By Golly, it appears as if you are NOT working for The People doesn’t it?

In fact it is now blatantly obvious that you are working for the Corporations, not The People.

There is no longer any doubt is there, as our government prepares to sell The people out …again….for the umpteenth time, that our government has been bought.

In fact it is no longer OUR government at all. Our government now blatantly and openly is working for the Corporations, not us.

Let’s state this clearly, shall we?

The American Government is passing Legislation that is against the interests of The American People.

It has never been more obvious.

Our Government has been bought.

And is now working against us.

(And in the case of Climate Crisis legislation, against the future of the human race!)

Our Government has been bought.

What are we going to do about it?

Please go to by slinkerwink’s diary and make some calls

The terrorist assassination of Dr. Tiller there have been calls on the Left for to abhorring the words of people like Bill O’Reilly and Fox News as well as those involved with Operation Rescue and other anti-reproductive freedom groups.  It is understandable when such a horrible act is committed to want to react in such a way as to prevent it from ever happening again. This has lead to calls for restricting the ability of those whose words may have encouraged and incited the anti-reproductive freedom terrorist, Mr. Roeder, to do so in the future. This is an understandable desire but one that should be strongly resisted.

RepubliCons Won’t Be Back ELECTORALLY

I certainly agree with the jist of Something The Dog Said’s currently front-paged essay . . . the grand OLD ?Party? is sucking itself into a black hole of self-immolation, at least on the national level. Their base won’t support anyone who has the slightest chance of getting elected outside of the South and/or the Mormon belt out West; and they despise moderates who might ostensibly have a shot at it.

While in certain way, this of course fills me with glee, I think there’s potential downsides that need to be addressed as well.

Look For The Union Label: Saving Jobs at the Company Making Obama’s Suits

I have some good news.  This is a story of how worker activism along with the help of Democratic officeholders can save jobs.

First, my title.   It’s title is derived from the fact that one of Workers United’s predecessor unions at Hartmarx was the International Ladies Garment Worker’s Union.   Looks like the union label will stay on the President’s suits.  (President Obama wore a Hartmarx suit at the Innaugaration, I believe.)

Two weeks ago workers voted to hold a sit-in action at the factores of the company that makes Obama’s suits (Hartmarx) if Well Fargo sold it to a company that would close the plants and send the jobs overseas.  This week, the bidder approved as the “stalking horse” bidder in bankruptcy is a good company who will keep jobs in Amerirca and honor the union contracts.

A Long Time Ago, We Used to be Friends

Supposedly the universe is expanding at an incredible clip, faster and further than ever before. Well, the scientists are saying so, anyway…and since similar research has recently, and successfully, predicted other improbable things such as the Tampa Bay Rays making it to the World Series, or Barack Obama becoming President of the United States, why not trust the onward March of Science? There is untrammeled growth at every turn, unchecked expansion in every way. From my cushy corner of existence, however, the reality is quite the opposite. You see, my own mental and physical boundaries are most definitely shrinking, and have been for some time now. It isn’t as if I hadn’t seen it coming, either-hell, I aided and abetted the steady retrograde orbit even when I had the chance to do otherwise.

Return of the Living Thread! 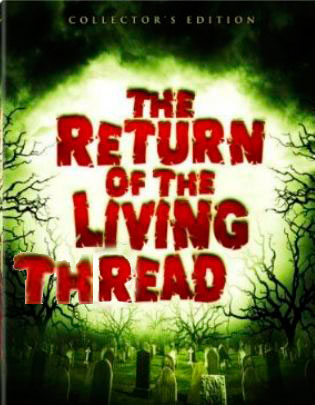 To free the sun

The eagle soars into turquoise and indigo

in cadence of wind and stillnesses

singing and swooping with currents and storms

and eagle descends on rose and mauve and amber light

to an eyrie for night’s long dream

with those scaled and coiled beings

who swallow the sun in their tangled trap

while the lost world waits in darkness and dream;

and in dreamworlds gods and goddesses

beat the pulse of prayer

creating song from cries of loss

fanning the glowing ember of the heart

green of growth, gold of maize

rainbow prisms of mist and sun

and the white quiet in the center

and as hope begins to flicker

in the endless dark tunnel of night

who dive for us all

fathomless seas of cobalt and black

dive through the surface

and now is the need for eagle’s sharp vision:

glimpse of turbulence below

in volcanic force the sun is caught

by serpents jealous and frenzied in battle

wings pull against the tidal vortex

moving with but not surrendering

for an endless moment hearts stop in their sleep

drums do not beat

embrace in the death of our dreams;

and in that moment the sun is freed

and begins to float luminous

toward that thin membrane where sea and sky meet

leaving an image of frozen fury far below

and finally, bursting through

with the fragile sound of silence and color

dawn is borne up on wings of light

light stirs us all

and an eagle soars toward the sun

on the sighs of our awakening

Published in “The Way Of The Shaman” by Michael Harner

Part 2 of our ongoing “If you build it” new coalition activism series. (WWL version)

In our effort to make a list of DEMANDS rather than suggestions, that can be brushed aside as “not feasible at this time” today we will address Health Care.

Let me repeat the Mantra:

A person and their doctor walk into a room. They decide what avenue will best keep that person healthy and alive. No bean counters. No multiple referrals. No putting it up for review with a bunch of multiple churches. They GET the care necessary.

The term “single-payer” confuses most Americans anyway. It makes it sound like THEY, a single individual must pay, a term probably chosen as a way to create a Pavlovian rejection, even while it is in people’s best interests.

Gottlieb suggested, “While single payer is the goal, I suggest we start with something achievable and that is “the public option” plan. The Public Option is the vehicle which can grow into single payer.” but I don’t agree. Any compromise we make will be used to stall and to thwart the process in the interests of the Healthcare Profit Industry to continue to make profits as “insurance” companies. (Sorry darlin, but we must commit to this)

If we could turn factories overnight into tank and bomber factories with 1940’s technologies, this too can and SHALL be done.

Our commitment must be in stone.