Welcome to the 9th in the Dog’s letter writing campaign series. This series is dedicated to taking action (even if it is a small action) every week on the issue of torture. Here is how it works, each week the Dog writes a letter highlighting some aspect of the torture issue and making the point this requires investigation. The Dog sends these letters to the President, the Supreme Court, AG Holder, Speaker Pelosi, Majority Leader Reid and Rep. John Conyers, the Chair of the House Judiciary Committee. Your part, if you chose to act is pretty easy. Simply cut and paste the letter and send it under your own name.

The war on small scale food producers moves into brewing

Not for the first time, craft brewing is under attack by the big boys. The Brewer’s Association, a consortium of professional and home brewers and the parent organization of the American Homebrewing Association, has formed a coalition to bring national awareness of issues concerning this industry to the general public. The AHA sent a disturbing message out this morning to it’s members living in the State of New York, which I’ve cut and pasted because it puts it more succinctly than I can. I’ve put it below the fold as non-New Yorkers might not be interested and it’s pretty space intensive. This IS an action alert, so if you live in NY State please take a look. 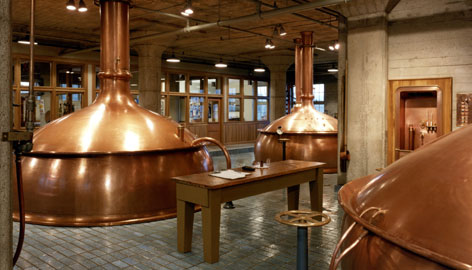 We Need Someone To Take On Torture Apologists.

It’s Monday so usually the first thing the Dog writes is the weekly torture letter,that is going to be a little later but there is something going on that he thinks the DD crew is uniquely suited to address. We are seeing a massive increase in the number of torture apologist articles in the newspapers and on the Web. This is the an attempt by the pro-torture camp, aided by the weakest kneed of the pundocracy to set the frame for the issue with the vast majority of population who are troubled about torture but not yet on board with investigations and prosecutions.

ONCE UPON A TIME…

America is not a suburb or a strip mall. It contains some vast unfathomable places. Places that evoke timelessness and spirituality regardless of one’s specific beliefs. As I hiked my middle aged self down and up trails I was struck by the way my petty thoughts, the ones that entertain me, the ones that occasionally obsess me, came to mean fundamentally nothing against the landscape.

Most of these pictures where taken at Zion, Bryce, and a few other parks and trails in and around Utah. Sadly, my talent does not match the majesty of the scenery but I hope they bring a slight sense of wonder and invoke my appreciation for a world that doesn’t change even as humanity swirls in confusion. Misha Lerner has a question

What did Rice think about the things President Obama’s

had used to get information from detainees?

For her an uproar, for him a whisper

Elite police in France complain of being used as dog walkers

Fiat could buy Vauxhall and Opel

An interview with a jailed Somali pirate leader

WASHINGTON – As the insurgency of the Taliban and Al Qaeda spreads in Pakistan, senior American officials say they are increasingly concerned about new vulnerabilities for Pakistan’s nuclear arsenal, including the potential for militants to snatch a weapon in transport or to insert sympathizers into laboratories or fuel-production facilities.The officials emphasized that there was no reason to believe that the arsenal, most of which is south of the capital, Islamabad, faced an imminent threat. President Obama said last week that he remained confident that keeping the country’s nuclear infrastructure secure was the top priority of Pakistan’s armed forces.

But the United States does not know where all of Pakistan’s nuclear sites are located, and its concerns have intensified in the last two weeks since the Taliban entered Buner, a district 60 miles from the capital.

Rory Carroll in Mexico City and Tania Branigan in Beijing

Mexico has protested about an international backlash against Mexican travellers who have been quarantined and banned from several countries as suspected flu carriers.

Mexican authorities tonight singled out China for its draconian measures and criticised four Latin American countries for restricting air links. More than 70 Mexican travellers were quarantined in hospitals and hotels in China as part of sweeping measures against swine flu.

“Mexican citizens showing no signs at all of being ill have been isolated under unacceptable conditions,” said Patricia Espinosa, Mexico’s foreign minister. “These are discriminatory measures, without foundation. The foreign ministry recommends avoiding travelling to China until these measures are corrected.”

Days after telling students at Stanford University that waterboarding was legal “by definition if it was authorized by the president,” former secretary of state Condoleezza Rice was pressed again on the subject yesterday by a fourth-grader at a Washington school.

Rice, in her first appearance in Washington since leaving government, was at the Jewish Primary Day School of the Nation’s Capital before giving an evening lecture at the Sixth & I Historic Synagogue. She held forth amiably before a few dozen students about her love of Israel, travel abroad and the importance of learning languages, then opened the floor to their questions.

The BBC’s American television soap Mad Men offers a rare glimpse of the power of corporate advertising. The promotion of smoking half a century ago by the “smart” people of Madison Avenue, who knew the truth, led to countless deaths. Advertising and its twin, public relations, became a way of deceiving dreamt up by those who had read Freud and applied mass psychology to anything from cigarettes to politics. Just as Marlboro Man was virility itself, so politicians could be branded, packaged and sold.

Much of the American establishment loathed Bush and Cheney for exposing, and threatening, the onward march of America’s “grand design”, as Henry Kissinger, war criminal and now Obama adviser, calls it. In advertising terms, Bush was a “brand collapse” whereas Obama, with his toothpaste advertisement smile and righteous clichés, is a godsend. At a stroke, he has seen off serious domestic dissent to war, and he brings tears to the eyes, from Washington to Whitehall. He is the BBC’s man, and CNN’s man, and Murdoch’s man, and Wall Street’s man, and the CIA’s man. The Madmen did well.