Mothers Speak about War and Terror”

Courage to Resist co-founder Susan Galleymore made international headlines by taking the extraordinary and even dangerous step of traveling to Iraq to visit her US Army son stationed on a military base in the so-called Sunni Triangle, north of Baghdad. She is now on tour to promote her new book “Long Time Passing: Mothers Speak about War and Terror”.

What Susan found in Iraq – the horrors of war which was at once heartbreaking and compelling – challenged her to continue her journey interviewing mothers in war zones including Iraq, Israel and the West Bank, Lebanon, Syria, Afghanistan and the US. These powerful first-person stories offer dramatic insight into the impact of war on mothers, families, communities, and cultures around-the-world.

Four at Four continues with Pakistan and genetic diversity of Africa.

QUESTION: There have also been allegations that the Bush Administration engaged in torture in terror investigations. Which of the following would you favor the most a criminal investigation into those allegations or an investigation by an independent panel or neither? 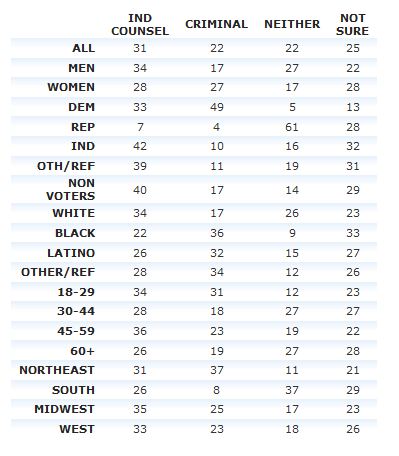 After the news broke of torture and humiliation of prisoners at Abu Ghraib, George W. Bush set up interviews to make the case that it was just a “few bad apples”.

Bush on an Arab television station after the Abu Ghraib situation went public, explaining the difference between a free nation with the rule of law and a dictatorship:

“It’s important for people to understand that in a democracy, there will be a full investigation. In other words, we want to know the truth. In our country, when there’s an allegation of abuse … there will be a full investigation, and justice will be delivered. …  It’s very important for people and your listeners to understand that in our country, when an issue is brought to our attention on this magnitude, we act. And we act in a way in which leaders are willing to discuss it with the media. … In other words, people want to know the truth. That stands in contrast to dictatorships. A dictator wouldn’t be answering questions about this. A dictator wouldn’t be saying that the system will be investigated and the world will see the results of the investigation.“

Will return to KAOS plus redux.

The radio show went pretty well, but there wasn’t time for a lot that needed to be said. Happily, the host invited us back to talk again…

They covered the need to prosecute, no doubt. But there needs to be more motivation for the mainstream

Memo to President Obama on Torture

In their first attempt to inform President Obama on a major intelligence issue, a powerful group of twelve intelligence experts who oppose torture has written a memo to President Obama asking him to investigate and prosecute torture by the Bush Administration. Veteran Intelligence Professionals for Sanity (VIPS), consistently challenged pre-war lies and fabricated justifications for the invasion of Iraq, beginning with Colin Powell’s speech to the U.N. in 2003. They were absolutely right – and were ignored by the media.

Now they are battling the widely-accepted lie that torture “works”:

The fact that the exploits of Jack Bauer have injected a dangerous level of fiction and fear among impressionable viewers, and have misled not only interrogators at Guantanamo but also the chair of the House Intelligence Committee, Silvestre Reyes – not to mention Supreme Court Justice Antonin Scalia – leaves no doubt that such illusionary scenarios need to be addressed by professionals with real-life experience.

They insist from professional experience that:

torture tactics are not only ineffective in terms of getting reliable, actionable intelligence but have fueled recruitment by Al Qaeda and other terrorist groups to the point that, arguably, more U.S. troops have been killed by terrorists bent on revenge for torture than the 3,000 civilians killed on 9/11

As Bob Fertik at Democrats.com put it yesterday:

In effect, Bush’s torture regime created a second “9/11” – only the victims were our soldiers.

Here in rabid Liberal blog land, we are obviously only interested in revenge on Republicans. We don’t actually CARE about torture, you understand, or justice, we are just out for vengeance and retribution upon the Evile Republicans. We hate them so much we will do anything to get them…

And the indisputable fact that they engaged in an organized, planned, infra-structured,

“legally” supported, researched, (though not well researched, because of the legendary Republican incompetence) well funded, and widespread continent spanning, Policy of Torture that was carried out against in some cases people known to be innocent, and in over 100 cases, tortured them to death….has absolutely nothing to do with my desire for investigations.

The fact that we are pursuing investigations to bring about justice and accountability to expose, forever repudiate, and hold accountable the torturers and those who authorized torture is just ….an excuse.

An excuse to carry out a “partisan witch hunt” to slake our bloodthirsty (even though WE weren’t the ones who tortured innocent people) desire to pick on and defame the poor innocent persecuted Republicans. Republicans whose incompetence and stupidity extended so far as to lead them so far as to wrongly and illegally invade an entire country. And proceed kill thousands upon thousands of people after 9/11 for specious reasons….that obviously included some form of revenge, vengeance, or …retribution. And ….torture innocent people.

But WE are the irrational, bloodthirsty ones.

Because we want investigations.

Happy Friday and welcome to the 4th in the Dog’s First Amendment Friday series. This series is following the syllabus for the class called The First Amendment and taught at Yale Law School by Professor Jack M. Balkin. As with the Friday Constitutional series this is a layman’s look at the Law, specifically the Supreme Court opinions which have shaped the boundaries of our 1st Amendment Protections. So far we have been working through cases that have had to do with seditious speech. If you are interested in the previous installments in this series you can find them at the following links:

For the Soldier who fights for Truth, calls his enemy his brother. — William Blake

Jason Leopold had an amazing find when perusing a new released FBI document the ACLU posted on their site earlier this week. [Update: Leopold informs me that the document was released in Dec. 2004, but he caught the info while perusing the ACLU collection over these past months.]

Senior FBI agents stationed in Iraq in 2004 claimed in an e-mail that President George W. Bush signed an executive order approving the use of military dogs, sleep deprivation and other harsh tactics to intimidate Iraqi detainees.

The FBI e-mail — dated May 22, 2004 — followed disclosures about abuse of Iraqi detainees at Abu Ghraib prison and sought guidance on whether FBI agents in Iraq were obligated to report the U.S. military’s harsh interrogation of inmates when that treatment violated FBI standards but fit within the guidelines of a presidential executive order.

I Bet You Miss

Those May Day Parades

Chrysler will feel unfulfilled in its Italian romance

After six years, one month and 11 days, Britain ends its military mission in Iraq

Nato and Moscow in war of words after Russian envoys expelled

Chris McGreal in Washington and Xan Rice in Nairobi

The World Health Organisation is distributing part of its stockpile of 3.5m anti-viral drugs to southern Africa and other vulnerable regions after warning about the risk of a health infrastructure ill-equipped to deal with a large-scale outbreak of swine flu, coupled with the onset of winter.

Keiji Fukuda, the WHO assistant director-general for health security, yesterday said the organisation had begun “distributing anti-flu drugs to countries most in need, as well as to Mexico”.

The WHO declined to say which countries were receiving the medicines but Fukuda said people in the southern hemisphere, where winter was on its way, were of particular concern. Previously the WHO said richer countries should act immediately to help the developing world prepare for a flu pandemic.

Fear of swine flu stills the noisy megalopolis, with parks and roads empty of children and traffic. But unlike the lull over a holiday weekend, this one is filled with dread.

Reporting from Mexico City — Stroll around this city for long and a gnawing sensation grows. The children are missing. This is a place where, normally, children are noisy, abundant, doted upon.

In an instant, they seem to have disappeared.

The swine flu outbreak in Mexico City has achieved the seemingly impossible: It has stilled this clamorous megalopolis of 20 million people. The streets are suddenly emptier, safer to cross, but lonelier. The parks seem bigger without the children. Fear of infection and government restrictions on public gatherings have combined to produce something like a city in hiding.

A week after officials announced the outbreak of the H1N1 flu, Mexico City — a teeming, polluted, noisy, thrilling behemoth — feels more like Phoenix than it does the largest city in the Western Hemisphere.

Justice David H. Souter, the Republican-appointed New England jurist who has become a reliable member of the liberal bloc on the Supreme Court, has told friends that he plans to retire, according to a government official.

Court spokeswoman Kathleen L. Arberg said last night that Souter had no comment following reports that he plans to step down at the end of the court’s term in June. Souter would be likely to stay on until a replacement could be confirmed. The court’s next term starts in October.

Souter’s colleagues on the bench have been trying to talk him out of retiring, according to a source close to the court.

Get Your Dread Out