Glacier National Park “The Crown of the Continent” was established in 1910 with the help and influence of George Bird Grinnell.  Many features in the park are named after him.  Located in northwest Montana it adjoins Waterton Lakes National Park in Canada.  The eastern side of the park borders the Blackfeet Nation.  The Blackfeet named the region “Backbone of the World”.  They sold the land to the US govt. in 1896 for mining purposes but they retained the rights to gather plant foods and medicines and to fish & hunt the animals.  Fortunately, no gold or silver were found so the ecosystem remained fairly pristine over time.  It is still considered to be sacred Indian land. 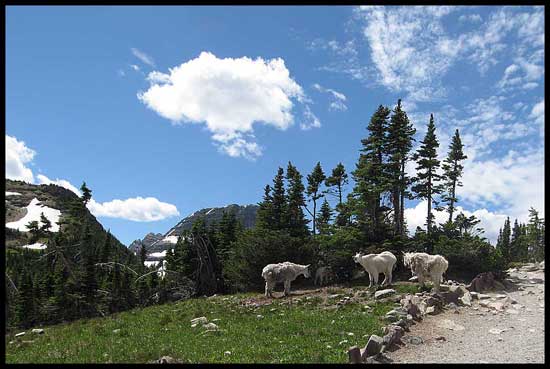 Photos were taken with a Canon PowerShot S80 (point & shoot) and have been edited and Photoshopped to adjust the light, sharpness, and color quality.  Click the images for a larger version.  In the interest of preserving the large format images I didn’t optimize the file sizes.  Apologies to our dialup users for that.

This will be a two-part series. Part I is Animals.  Part II will be Water.

Next Wonderful Writer You Might Not Have Heard Of : Adolfo Bioy Casares

As promised, my next WWYMNHHO essay (in about 2 weeks or so mas y menos) will be about Adolfo Bioy Casares’ novel The Invention of Morel, a short, intense, brilliant novel.  Both Borges and Octavio Paz described the novel as “perfect.”  It is a small gem (100 pages +/-).

This little notice is here at kj’s suggestion.  Folks may want to read the book before the essay, and discuss it in the comments to the essay.  Maybe WWYMNHHO can be our version of the Algonquin Round Table. Or Gertrude Stein’s living room.

The problem with lefties/dems is not that they don’t believe in anything , as the repubs like to say, the problem is we believe in too many things. As a very blanket statement, we believe in everything that we think will make the world a more just, egalitarian and peaceful place. Ok, pretty unified so far. We believe that government and citizens should work together to make the world a better place. Still with me? We believe that…..ok, I have run out of things we all believe.

One possible explanation is that we are just too smart, unlike the R’s, who Krugman maintains have become the party of stupidity.

What I mean, instead, is that know-nothingism – the insistence that there are simple, brute-force, instant-gratification answers to every problem, and that there’s something effeminate and weak about anyone who suggests otherwise – has become the core of Republican policy and political strategy. The party’s de facto slogan has become: “Real men don’t think things through.”