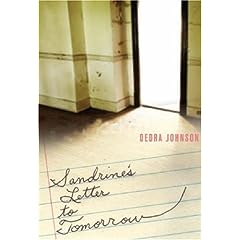 I met Dedra Johnson at a book signing just before Christmas.  Earl Higgins, Dedra, and I were signing our books at the Loyola University's bookstore.  I'd been hearing about Sandrine's Letter to Tomorrow from friends, bloggers, and others for a coiuple of months.  It's not the type of novel I usually read, but Dedra's a local author writing about New Orleans, good enough for me.

Sandrine may not be the type of character I usually get into, but I got into the novel nonetheless.  It is a well-written story with lots of local color and a cast of characters who are very easy to love and/or hate, just like family members.

I'm going to offer some more thoughts below the fold.  SPOILER WARNING – don't go there if you haven't read the book.

Sandrine Miller is a light-skinned black girl growing up in New Orleans' 7th Ward in the 1970s.  Her parents never married.  Her father is a physician who moved to Mississippi, and her mother lives next door to Sandrine's grandmother.  Sandrine attends a Catholic elementary school near N. Broad St., and spends summers with her father and her paternal grandmother in Mississippi.  The book tells the tale of Sandrine's life as she develops from a pre-teen to a young teenager, addressing the issues of not merely a black girl growing up, but a light-skinned girl who is ostracized by friends and family because she “looks white.”

Sandrine's life is not an easy one.  Her mother isn't much of a mother to her, since she sees too much of Sandrine's father in her.  When Sandrine's father's-wife's-daughter (you'll see how this connects in the book), a girl several years younger than her, comes to live with Sandrine and her mother, she feels even further mistreated by her mother, because the darker-skinned girl receives better treatment.  Dedra mixes teen anger with racial and sexual injustices in just the right amount to keep the pages turning, wanting to see what happens next and how Sandrine will deal with it.

Some say that Sandrine doesn't cover any new ground, that other authors have addressed these themes, but the local flavor of reading about New Orleans in the 1970s was enough to rope me in where authors like Maya Angelou didn't call to me half as much.  Arkansas isn't New Orleans; I was just a few years older than Sandrine, and rode the bus through her neighborhood.  Sandrine is Catholic and taught by nuns, and that experience triggers an almost Junigan-collective-unconscious thing when you see it on the written page.  If you like New Orleans and you like coming-of-age stories, this one is a winner.

There were a few things that really struck me about Sandrine, the amount of sexual abuse in the novel, and the extent to which Sandrine and I saw the same neighborhood so differently.

My mother was an elemetary school principal.  I'd been hearing stories from her about how difficult it was to work with the very young mothers she was seeing more and more of once the feds ordered busing in Jefferson Parish schools.  Women as young as twenty were bringing six-year olds to register them for first grade, and the schools had all sorts of problems dealing with these families.  In some cases, like Sandrine's, there was a grandmother around (Sandrine's “Mother Dear,”) who provided a bit more stability, which explains how Sandrine ended up in parochial rather than public school.  The problem with having a mother barely out of adolesence herself is the amount of sexual activity around the children.  That the young girls get caught in that web is not all that shocking.  The grandmother wouldn't mind seeing her 20-something daughter marry a man who will provide better for her, so she isn't going to discourage the men coming and going from next door.  What I found most disturbing is the attitude of the men, that girls as young as 9 or 10 weren't off limits for oral sex, and it wasn't much longer after that before the gilrls were fully sexually active.  The other issue I found disturbing was the attitude of the older black women on this, that the little girls were leading the men on, therefore there was no outrage at a man who was trying to force a 10-year old girl to have oral sex with him.  In many ways, Sandrine's mother viewed her as competition.  Because of this, the men could rape these young girls with impunity.  The only man who actually suffers consequences for abusing a young girl is stepdad of a white girl.

Which brings me to the second issue that moved me while reading the novel, White Privilege.  Sandrine's story showed me a side of a neighborhood I thought I knew fairly well that I'd never really seen.  I rode the Broad bus many an afternoon, from Elysian Fields and Gentilly to Broad and Canal, where I'd transfer to the Canal line to go back to the white-bread suburbs.  Some days, I'd switch things around a bit, getting off at Esplanade and taking that line down to the cemeteries.  We'd stop at the K&B that Sandrine writes about, or the Tastee Donuts occasionally.  To me, this was the neighborhood of Ruth's Steak and Lobster House, Crescent City Steak House (a place I went on one of my first “big dates.”), Seafood City (very pretty!), and many other places along the way.  It wasn't any more or less dangerous to me than many other parts of town, since we were always there in the afternoon to early evening.  Being white and a male meant I didn't have black men following me down the street, trying to get me in the car with them for sex.  The roundabout ways Sandrine walked home sometimes were not part of my thinking when I was in that neighborhood.

I've never been fully able to appreciate the concept of “passing,” and the emotions that come with it.  I went to school with a guy whose older brother went to Jesuit, and developed a reputation for being one of the “radical black” kids.  Not wanting to follow in those footsteps, this guy went to Brother Martin.  While black guys were always a small minority at BMHS, they were a diverse group in themselves, including athletes, scholars, debate team kids, drama club guys, you name it.  Some were light-skinned, but didn't try to “pass.”  I guess there were so few black guys in the first place that the light-skinned ones didn't get ostracized like Sandrine did.  Maybe it was different at an all-black school like St. Aug.

I still don't get it, but Sandrine's got me thinking about it all.  It's interesting to listen to my son's attitudes on race.  Of course, that can get me angry, though, because so many of the black families what would be sending their kids to Brother Martin are no longer living in New Orleans, thanks to the Federal Flood.  He doesn't take the Broad bus home, either–the service is too irregular because post-storm bus operations are nowhere at the levels they used to be.

I definitely will get him to read Dedra's novel, though.