Who Will Fight The Media Now?

With this morning’s announcement that John Edwards would be suspending his quest for the Democratic nomination for president, the media reform movement has also dropped out of the campaign.

Edwards was the only candidate to have directly addressed the problem of the media in this country. He recognized the danger of unregulated corporations controlling access to the media megaphone that all candidates and initiatives rely on if they harbor any hope of success. His own candidacy was a victim of the exclusionary predilections of Big Media.

Who will carry on the fight for media reform now that its strongest advocate in the race has withdrawn?

I live in rural Columbia County, New York.  Columbia County is about 25 miles SE of Albany, New York, in the Hudson Valley.  It abuts Berkshire County, Massachusetts.  And it’s really beautiful.  It’s also experiencing the same recession as the rest of the country.

The current recession has already thrown the real estate market into a deep freeze, so that home sales are very, very slow.  Fortunately, there have not been a huge number of subprime mortgage foreclosures, though there have been a few.  Gasoline is down to $3.21/gallon today.  Heating oil is $3.389/gallon.  There was an announcement last week that the state was going to close the Hudson Correctional Facility, the second largest employer in the county, within a year.  The Correctional Facility employs 277 workers.  Local politicians of all stripes are fighting the proposal; I’m not optimistic that those jobs will be spared.  Most likely, the jobs will be moved away.

Two decades ago Columbia County used to be filled with dairy farms.  Those farms disappeared during Reagan’s dairy farm liquidations.  There are few dairy farms left.  This has resulted in huge herds of deer, which browse land that was formerly pasture, and a large growth of second homes for people from New York City, New Jersey, Long Island, and Boston (all about 2 hours away).  Two decades ago Columbia County had factories.  Now there are very few.  Mostly, the county is filled with rural, second homes, people who provide services, or telecommute, or commute to Albany, or to Hudson.  There is no Starbucks in Columbia County.  There is a Wal-mart.  There is no Home Depot or Lowes.  There is no large mall though one is planned.  There is a lovely, new food coop in Chatham.  There are many restaurants. There is theater, and an excellent film festival, and art and sculpture.  There are amazing, organic farms.  But I digress.

There’s a poll below the fold… why don’tcha vote in it. Okay?

Impeach Mukasey Now: Waterboarding Not Torture According to Bush’s AG

Crossposted at Daily Kos and Invictus

I know there is another diary on Mukasey and waterboarding up, by BarbinMD. I recommend it. But this is not a duplicate diary. It covers today’s hearing (still in process as I write), and calls for Mukasey’s impeachment, giving the reasons why. It also goes into some detail on the legal points involved.

Actually, what Michael B. Mukasey said today at his Senate oversight hearing was that waterboarding, under non-specific certain circumstances, is not torture. Of course, he couldn’t say that outright; he said in legalese. In the obscurity of U.S. law, torture is defined as something that “shocks the conscience.” And Mukasey, squirming before Sen. Dick Durbin’s questioning, feels that after extensive review, piles of documents and opinions, the question of waterboarding is — sometimes — “unresolved.”

Here’s some of the testimony between Durbin and Mukasey (thanks to Firedoglake):

FLASH! From your editors at the Weekly Hyperbole.

Our sources have informed us of a stunning new development that outlines and emphasizes the lengths the Bush Administration will go to in their perfidious quest for power. It appears that this time they are preparing a direct assault on American political opponents. In a covert operation that we have heard referred to as Operation Drop Dorothy’s House, US spy agencies have propelled an object thought to be about 13 feet to 16.5 feet across, and weighing a maximum of 10,000 pounds out of orbit and on to a path that will cause it to strike Brattleboro, Vermont.

“It’s really just a big thing falling on the ground that we want to make sure we’re prepared for.”

This reporter has found an anonymous source who has this to say. “Yeah man, these cats have been trying to ‘drop a house’ on some dudes for a log ass time. These motherfuckers are sick.”  Before we could obtain more information, our informant finished his cigarette and headed back into the bar…a bar that this reporter has been barred from entering after the previously reported story Reporter Discriminated Against For Political Views, Proprietor Claims  “Dancing Naked On Pool Table,” thus ending the interview.

Question: What do you get when you mix the infamous Serious Cat 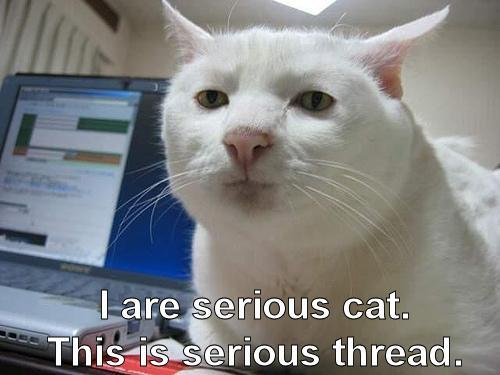 (warning:  9 minutes long. view at your own barf/hairball threshold)

Yesterday, I dropped Live’s “mirror song” into the comments of the a.m. pony party.

It’s long been a family favorite, and it’s one of the songs that I’ve called home from a concert to share with a non-attending family member.  It’s sort of a family tradition to call each other when we’re at a concert to share the experience.  I thought it was pretty commonplace, but the few times we’ve offered our phone to folks with us to call home and share a song, they’ve looked at us like we were insane or something.  go figure….

So today I’m posting a few of my family’s ‘gotta share this’ songs….so now you can consider yourselves part of our family 😉

1 US troops reductions in Iraq may slow

I am all for running everywhere, and the 50 state strategy.

This diary is partly inspired by the great work done by BENAWU.

crossposted to dailyKos and SwingStateProject

I am all for running everywhere, and the 50 state strategy.

This diary is partly inspired by the great work done by BENAWU.

crossposted to dailyKos and SwingStateProject